Wednesday afternoon, State Representative Andy Holt let loose with a blistering rant against the House Transportation Committee’s arcane maneuvers to pass Gov Bill Haslam’s IMPROVE Act, going so far as to include a photo of a bag of thirty pieces of silver. 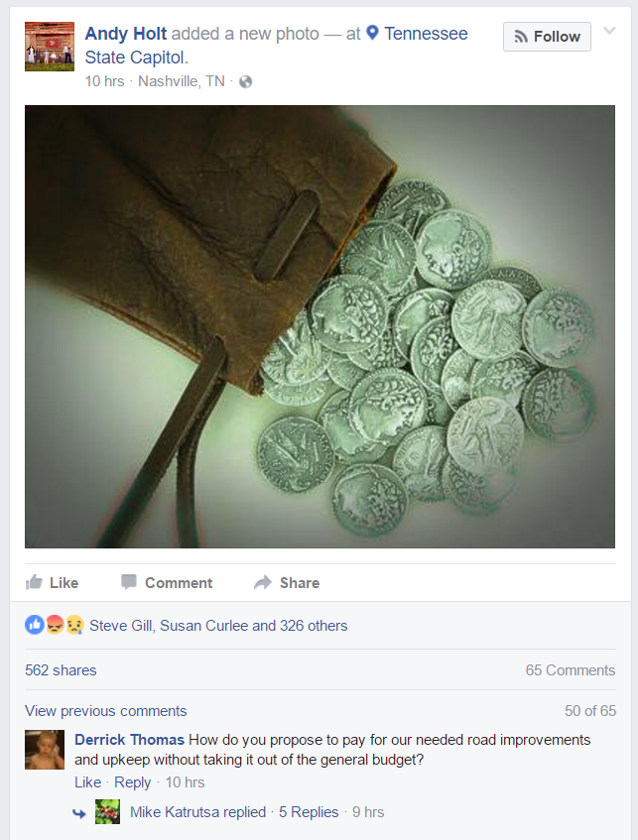 The Governor’s gas tax just passed out of the House Transportation Sub-Committee. That’s what you expected from the “fiscally conservative” super-majority controlled republican House of Representatives here in Tennessee, right? So. Gross.

If allowed to pass, your taxes are about to go up by HUNDREDS of MILLIONS of dollars in Tennessee — literally!! You all need to know something. You need to know the truth. You deserve the truth. The “media” will likely tell you that the tax was “stripped out of the bill”. That’s not true, and they know it isn’t…
This episode of political theater was a well orchestrated display. The bill will soon be returned to its original form so they can add back all the taxes, and possibly more…

Worst part of all? The “media” has been told by countless people what’s going on behind the scenes. They’ve literally been shown proof of corruption, lies, and quid pro quo, but they have refused to report it.

But what more do you expect when Tennessee’s largest newspaper endorses Governor Haslam’s tax increase? Since the media won’t do their job (they’ve proven time and time again that we cannot count on them), will you help me? SHARE the truth! It’s not too late to kill this thing.

What a shameful day for the media and a “Republican” controlled state government.

These folks are supposed to serve their constituents; not themselves, not bureaucracies & not the governor.

They have sold us out in pursuit of favor, payoffs, and/or simply bowed to political pressure. It sickens me to see such cowardice displayed in the life of any person, but especially those who are identified as “leaders.”