Saint Patrick’s Day is here, and so it goes we join millions across the globe to don our best green garb and imbibe in a panoply beverages from the unnaturally verdant Shamrock Shake to the local pub’s green draft – all in a joyous tradition to cheer one another in the name of a spiritual hero of Ireland.

But did you know the true-life story of the man who would become St. Patrick is as harrowing as any high adventure you might find in the pages of a Batman comic?

Here are 6 facts you might not have known about the life and times of St. Patrick:

St. Patrick’s only known name prior to his canonization is “Patricius.” He was a born late in the fourth century in Roman Britain – most likely the modern Wales region, although some scholars say it was Scotland. Like many Romans of that era, his family were devout Christians. His father, Calpurnius was a deacon, and his grandfather Potitus, was a priest.

(2) St. Patrick did not share his family’s faith, and was a skeptic.

In his book, Confessio, St. Patrick writes that as a boy, he was not a believer.

(3) St. Patrick was kidnapped and sold into slavery when he was 16 years old.

By this time in history, the Roman Empire was in steep decline after decades of overreach. Roman troops were withdrawn to the south, exposing citizens to barbarian raids from the neighboring territories.

Patricius fell victim to opportunistic raiders and was sold to an Irish druidical high priest and chieftain named Milchu. The boy was sent to tend his new master’s flocks as a shepherd.

During this time, St. Patrick writes later, he strengthened his relationship with God through prayer, which lead him to accept Christianity. 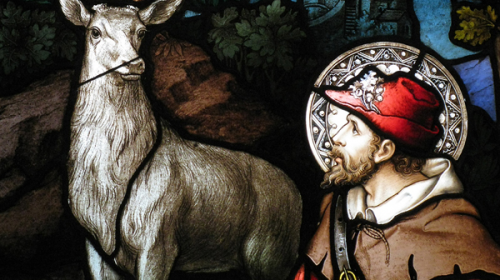 (4) St. Patrick escaped his captors when he was 22 years old.

St. Patrick writes that after six years of hard labor, he was admonished by an angel to flee, and that a boat was ready. Patricius ran away, travelling on foot for 200 miles where, in fact, he was able to gain passage on a ship back to Roman Britain.

After reuniting with his family, Patricius left to join a monetary to begin his Christian studies in earnest.

The shamrock is not a symbol of Ireland, as many people think. (It’s actually the harp.) But the shamrock is closely associated with St. Patrick because, as a missionary in Ireland, he used the lobed clover to help explain the Divine Trinity. Specifically, how the Father, the Son, and the Holy Ghost are separate and still One.

In just 30 years, Christianity had reached every corner of the Emerald Isle.

“St. Patrick’s Breast-Plate” is said to have been written by St Patrick himself as he neared victory over Paganism in Ireland. This is a literal translation from the old Irish text:

I bind to myself today
The strong virtue of the Invocation of the Trinity:
I believe the Trinity in the Unity
The Creator of the Universe.

I bind to myself today
The virtue of the Incarnation of Christ with His Baptism,

I bind to myself today
The virtue of the love of seraphim,
In the obedience of angels,
In the hope of resurrection unto reward,
In prayers of Patriarchs,
In predictions of Prophets,
In preaching of Apostles,
In faith of Confessors,
In purity of holy Virgins,
In deeds of righteous men.

I bind to myself today
The power of Heaven,
The light of the sun,
The brightness of the moon,
The splendour of fire,
The flashing of lightning,
The swiftness of wind,
The depth of sea,
The stability of earth,
The compactness of rocks.

Christ, protect me today
Against every poison, against burning,
Against drowning, against death-wound,
That I may receive abundant reward.

I bind to myself today
The strong virtue of an invocation of the Trinity,
I believe the Trinity in the Unity
The Creator of the Universe.