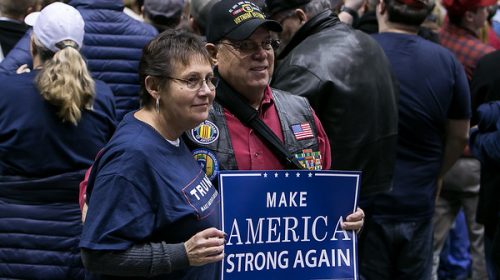 The unseasonably cold temperature that topped out about 40 degrees with a substantial wind chill had no apparent impact on the enthusiasm of President Trump’s supporters who showed up by the thousands in Nashville on Monday. About 10,000 made it in to the Nashville Municipal Auditorium in time to hear the president’s speech, while as many as 5,000 who had stood in line did not make it in, due to the TSA security clearance process.

Most of those waiting in the line that extended more than a half mile from the auditorium’s entrance had been there about six hours before being able to get inside.

For many, the positive experience started while standing in that long line of rally ticket holders.

Robin, who called in to Ralph Bristol’s Morning Show Ralph Bristol on WTN 99.7 the morning following the rally, said that there was “camaraderie” amongst those waiting in line and that everyone was “optimistic about the future.”  Even though she arrived at 2:30 p.m., Robin was not able to get into the Auditorium before President Trump finished his speech, but said she would do it all again.

Inside the Auditorium, the event started with comments and heads bowed for the invocation by Dr. James E.K. Hildreth, President of Meharry Medical College, during which he called for unity, saying that we are better together.

With hats still in hands and hands over hearts, seemingly in response to the invocation, people of every age, shape, color, size and physical capability enthusiastically joined together in reciting the Pledge of Allegiance and singing the National Anthem.

Meanwhile, President Trump was traveling from his visit to The Hermitage, home of President Andrew Jackson, also attended by many members of the Tennessee General Assembly.

One state legislator said that the Hermitage event was history making for them, in that they had never seen a sitting President before.

The rally attendees standing in front of the stage likely would not have known that President Trump had come out from behind the black curtains with all of the hand-held signs blocking their view, except for the near deafening cheering by their fellow rally attendees.

After speaking for about an hour on a variety of topics, President Trump departed the stage, and the crowd peacefully dissipated.

On the walk back to his car, one man who had been in line from about 1:30 p.m., barely made it into the auditorium before President Trump started speaking.  He said that even though it didn’t look promising, he was glad he didn’t give up and miss his chance to see President Trump.