Proponents of the bill have been claiming it is revenue neutral, despite the fact that they are using tax cuts passed in previous years to balance against the huge fuel tax increases contained in the legislation aimed at increasing road funding by approximately $300 million per year. Now, proponents are rebranding the legislation again as a “tax cut” despite the fact that the primary “cuts” flow only to a few dozen large manufacturing companies. 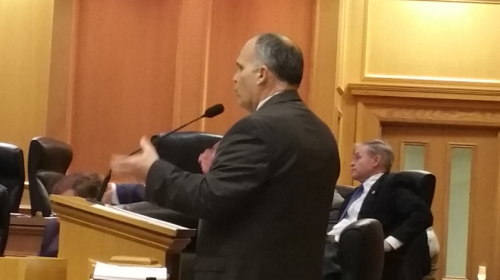 On Monday State Rep. Jerry Sexton (R-Bean Station) and 16 other members of the House called on Speaker Beth Harwell to send the bill back to the House Transportation Subcommittee for a “fair and open debate.”

On Tuesday Speaker Harwell’s office told The Tennessee Star she did not have the legal authority to do that under House rules.

Rep. Gerald McCormick made the motion to change the name of the act, which was greeted with derisive laughter from those in the room, but the amendment renaming the legislation passed unanimously nevertheless.

Taxpayers will note the details of the ailing measure remain untouched, only the name has changed. Most Tennesseans will see large increases in what they will pay at the gasoline and diesel pumps, with minor savings in the food tax charged at grocery stores.

“As this stands, this renamed road bill is still and always has been a tax increase for the overwhelming majority of Tennesseans who will be paying more at the gas station and more for their purchases at the grocery store delivered by diesel fueled trucks,” Tennessee Americans for Prosperity Director Andy Ogles said. “You can put lipstick on a pig and call it pretty, but it is still a pig.”

Rep. Judd Matheny pointed out that: “Shakespeare wrote that a ‘rose by any other name would smell as sweet.’ The Tennessee legislative version written by the Republican leadership should presumably read “cow manure renamed beef brisket still stinks!”

Political strategist and conservative commentator Steve Gill said that the impact of the bill itself defines it more than the name at the top of the paperwork. “When working men and women in Tennessee end up paying MORE in taxes rather than LESS that is a tax INCREASE, not a CUT. Voters understand that, and those who vote for this deceptive bill will understand it as well in August 2018 Republican primaries when the voters help explain it in terms that politicians best understand.”