A Canadian publisher that markets in the U.S. has come out with a new book and teacher resource guide on “transphobia” that target children as young as nine.

The materials reflect the intensity of the efforts on the part of radical progressives to overturn traditional and biblical ideas about gender and relationships. 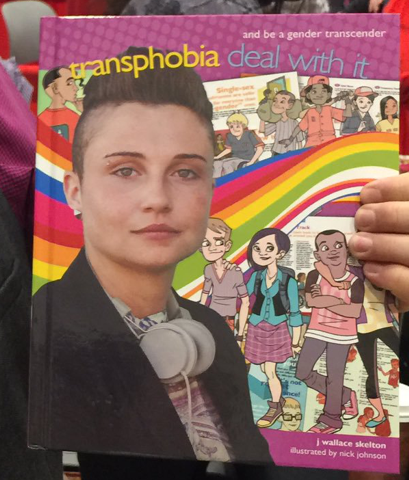 Published by Lorimer and titled Transphobia: Deal with it and be a gender transcender is one in a series of books carrying the phrase Deal with it. The books address resolving conflict related to a range of issues, including image, anxiety, bullying and cliques. The series is designed for children ages nine through 12, according to the Transphobia teacher resource guide. There also is a book in the series called Homophobia: Deal with it and turn prejudice into pride.

Transphobia is authored by J. Wallace Skelton, who works for the Toronto District School Board’s Gender Based Violence Prevention Office. On his Twitter page, he identifies himself as a “queer trans.” In an email sent by Lorimer to potential customers, Skelton is described as “an educator, activist and writer.”

“For more than a decade he has worked in schools to make them safer and more celebratory places for people of all sexual orientations and gender identities,” the email says. “He lives in Toronto with his partner and their two children.”

“We want to allow people to be their own experts, which means that individuals get to decide their own identity, who they are, what pronouns feel right and how they want to live in the world,” the guide says.

The guide recommends various classroom activities, including having students brainstorm about the challenges faced by those who don’t consider themselves either male or female, or both, and what can be done to remove those challenges. Another suggestion is having students research “trans people” in the contemporary world and in history who are positive role models.

Lorimer also publishes novels for teens ages 13-18 with homosexual and transgender themes. Same Love is about a boy whose parents send him to a Christian camp when he reveals he’s gay, but then he meets and falls for another boy and believes he can’t change. Love is Love is about an overweight and unhappy girl who attracts the attention of someone who is transgender.