Rep. Barry Doss (R-Leoma) told the House Finance, Ways and Means Committee on Wednesday he was “proud to bring the bill before you,” as he presented Governor Haslam’s IMPROVE Act, the gas tax increase proposal he co-sponsors, for consideration.   Rep. Doss continues to sponsor and present the bill, despite the call for an ethics investigation by the Tennessee Republican Assembly over potential Tennessee Department of Transportation contracts for his company.

Doss statement of pride in the gas tax increase proposal came both in his opening statement and again later in response to Rep. David Hawk (R-Greeneville).

Hawk said he would continue to work to “present a plan our colleagues can vote for, as opposed to presenting a plan that our colleagues may have to hold their nose and vote for.”

Doss took exception to Hawk’s comments, and said again that he was proud to sponsor the gas tax increase bill and that he is “not holding my nose today.” He conceded, however, that it’s “going to take some education of our constituents,” something he said he has “been doing for a solid year.” 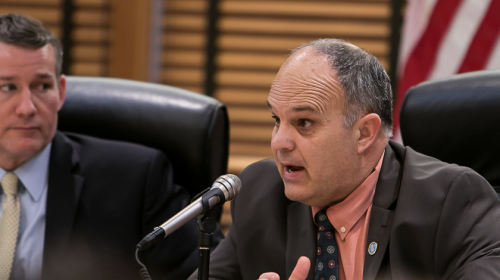 Although he has served two previous terms in the House of Representatives, Rep. Doss has not been a member of the House Transportation Committee until this year, when he was appointed Chairman, replacing Rep. Jimmy Matlock (R-Lenoir City). Matlock ran against Beth Harwell (R-Nashville) as Speaker of the House, and his removal from the chairmanship was seen by most members of the House as political payback for his unsuccessful challenge to Harwell’s leadership.

As Chairman and strong proponent of the bill, Doss has used his position and broken House rules to advance what was original called the IMPROVE Act with the gas and diesel tax increases proposed by Governor Haslam.

The first order of business for the bill was to rename it by adding the words “2017 Tax Cut” to “IMPROVE Act,” as previously reported in The Tennessee Star.  The renaming was done by attaching what Rep. Doss called a “friendly” amendment from Chairman Gerald McCormick (R-Chattanooga), which also stripped the veterans’ property tax relief benefits, a move that had been strongly called for by the Veterans Caucus.

Continuing the trend of dizzying revisions, Rep. Doss later withdrew his amendment, identical to that of Rep. McCormick’s with the exception of the name change and the veterans’ property tax relief benefits.  The inclusion of the veteran’s benefits, Doss said, was “not by my choice nor the Governor’s choice.”  Doss did not offer an explanation as to how the veteran’s benefits were added to his original amendment that embodied Governor Haslam’s IMPROVE Act.

Chairman McCormick allowed and encouraged ongoing dialogue between the sponsor and Subcommittee members saying, as one example, ”Take your time.  We’re in no rush.  We’ll take all the time we need and we can come back at 3 o’clock if we need to.”

McCormick’s conduct at Wednesday’s Finance Subcommittee meeting was in stark contrast  that of Rep. Tim Wirgau (R-Buchanan), who chaired last week’s  Local Government Committee as it considered what was then called the IMPROVE Act.  The discussion of the bill and proposed amendments in the Local Government Committee lasted about nine minutes, when Chairman Wirgau forcefully pushed through a voice vote to the objections of Rep. Jerry Sexton (R-Bean Station) and Larry Miller (D-Memphis).

Throughout his more than hour-long review and questioning on the details of the  2017 Tax Cut Act, Rep. Doss very artfully attempted to specifically incorporate the term “user fee” whenever he referred to the increases in the gas and diesel tax, while exploiting the term “tax” when referring to the decreases relative to franchise and excise, sales tax on groceries and the Hall Income Tax (HIT).

Rep. Ryan Williams (R-Cookeville), new to the leadership as the Republican Caucus Chairman, said there are things about the bill that he doesn’t like, in particular the Hall Income Tax.

Specifically, Williams argued that it is not right to include Hall Income Tax cuts promised to come this year in the bill signed into law last year when calculating the tax cuts included in the  2017 Tax Cut Act

“We promised the citizens of the state,” Rep. Williams said.

“Until we take it out of the budget, it’s not out,” Doss replied to Williams’ undeniable statement of fact, ignoring the fact that the legislature is already compelled by law passed in 2016 to completely phase out the Hall Income Tax by 2022.

Rep. Williams then discussed his own amendment to the   2017 Tax Cut Act that would “attempt to eliminate some of the things that might not be pretty about it.”

He said his plan calls for gas and diesel tax increases of six cents and nine cents per gallon, respectively, a half cent for the aeronautics fund, and a $50 registration fee for hybrid cars.  The major difference in Rep. Williams’ plan and the   2017 Tax Cut Act is that it would cut the state sales tax of 7 percent by one-quarter percent in addition to a half percent cut from 5 to 4.5 percent on food tax.  In total, Williams’ amendment would deliver a $30 million tax cut, he said.

Without much explanation about why the amendment was not officially presented and voted on, Rep. Williams withdrew his amendment.

Chairman McCormick said the amendment was “something we could work with if it had come in a different part of the process.” 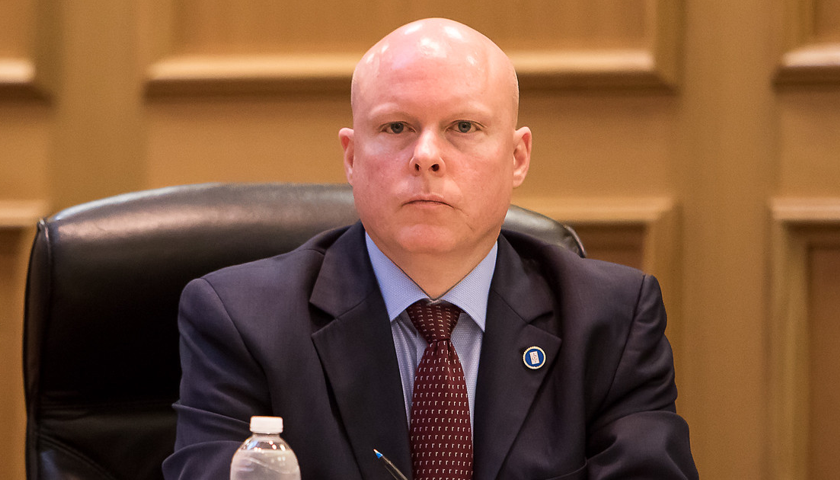 Rep. Hawk, author of the “Hawk Plan” introduced in early February that funds road construction by moving one quarter percent of the sales tax revenue surplus in the over-flowing General Fund to the Highway Fund,  and does not increase gas taxes, was persistent in questioning Rep. Doss about some of the logical inconsistencies in his argument supporting the   2017 Tax Cut Act.

Rep. Hawk noted, for instance, that the   2017 Tax Cut Act uses the General Fund as the source of the tax cuts that offset the gas and diesel tax increases to be designated to the Highway Fund, which, on the face of it would appear to be a violation of the purported “user fee” principle upon which supporters of the gas tax increase proposal say it is based.

After Rep. Doss provided lengthy and indirect responses to his questions, Rep. Hawk ended the dialogue by firmly stating that he was placing “individuals on notice as of this moment” that he “will continue to work on an alternative plan.”  That plan has been discussed with House Speaker Beth Harwell (R-Nashville) and Rep. Hawk’s work on it will continue with Speaker Harwell, should the bill “move forward to full Finance Committee.”

By voice vote, “ayes prevailed” and the  2017 Tax Cut Act advanced to the full House Finance, Ways and Means Committee which will hold its next regularly scheduled meeting Monday, April 10.

As The Star reported, the following day, Speaker Harwell confirmed her intention to offer a road funding alternative plan to be presented at the full Finance Committee meeting.  While all the details are not yet available, Speaker Harwell indicated the plan will transfer existing sales tax revenues for new and used car sales from the General Fund to the Highway Fund and require no gas tax increase.