A Tennessee bill that would have offered in-state college tuition to illegal immigrants died in a House committee Tuesday morning, effectively ending its path forward this legislative session.

The Education Administration and Planning Committee shot down the bill in a close and emotional 6-7 vote.

“I cannot pass the burden onto the taxpayers of Tennessee,” said Rep. Dawn White (R-Murfreesboro) during a discussion before the vote.

She said Tennessee would become a magnet for illegal immigrant families who would want their children to be able to take advantage of in-state tuition. The influx would create a need for more schools at the K-12 level and raise property taxes at time when some schools already have a number of portable classrooms, she said.

Similar legislation passed in the Senate in 2015 but failed by just one vote in the House.

Rep. Mark White, the House bill sponsor, was overcome with emotion Tuesday and seemed near tears as he asked for support for the bill. He said young people brought to the U.S. through no choice of their own should be eligible for in-state tuition. He said it was “a basic conservative Republican position” to help people who take the initiative to better their lives. Many of the young illegal immigrants are from families of modest means, he said, noting that they would not be eligible for federal loans, the Hope Scholarship or Tennessee Promise.

“They’re not asking for anything,” he said. “We’re not subsidizing them.” 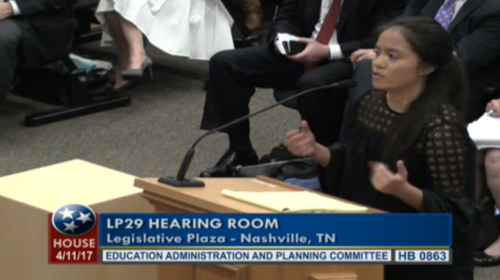 A young woman from Knoxville told the committee that she was brought to the U.S. at such a young age that her earliest memories are of life in East Tennessee. She said her dream has been to attend the University of Tennessee-Knoxville. After she spoke, Rep. Johnnie Turner (D-Memphis) said she could empathize with her and likened denying in-state tuition to illegal immigrants to the racial discrimination she faced as an African-American during her younger years. She referred to illegal immigrants as “my Hispanic brothers and sisters” and said that Drive to 55, the state’s program to boost graduation rates from postsecondary schools, “didn’t say anywhere we were going to discriminate against anybody.”

Rep. Craig Fitzhugh (D-Ripley) said the bill “has nothing to do with immigration. It has to do with education.” Rep. Raumesh Akbari (D-Memphis) began to talk about a high school in her district with a significant Hispanic population, but looking like she was about to sob, said she wouldn’t speak after all.

Legislators in support of the bill said it makes little sense to offer illegal immigrants a K-12 education only to then make attending college a burden by requiring them to pay out-of-state tuition. Schools at the K-12 level are bound by a 1982 Supreme Court ruling to give children a free public education regardless of immigration status.

The legislators criticized politicians in Washington, D.C., for putting states in a difficult position by their inaction on immigration issues, but said Tennessee’s reputation would suffer if the bill did not pass. At least 18 states offer in-state tuition for illegal immigrants.

Opponents of such legislation say it rewards breaking immigration laws and creates further problems in trying to get illegal immigration under control.