Governor Haslam is concerned enough about the final outcome of next week’s proposed gas tax increase vote on his “Tax Cut Act of 2017” to set up a series of private 20 minute meetings with state legislators who are on the fence.

In an email sent to staff assistants of fifteen members of the Tennessee House of Representatives on Wednesday obtained by The Tennessee Star, one of the governor’s administrative assistants “requested” these targeted legislators appear in “his conference room on the first floor of the Capitol,”beginning on Thursday. The purpose of these meetings appears to be for the governor to give these state legislators the “hot box” treatment.

“Hot boxing” is a method of interrogation in which the person being interrogated “is locked in a ‘hot box’ – a small, hot room,” according to List Verse.

“The Governor has set aside 20 minute slots in his schedule tomorrow, Monday, and Tuesday. He would like to meet with each of your Representatives in his conference room on the first floor of the Capitol,” the email began.

You can read the complete email, with names of the sender and recipients redacted, below. 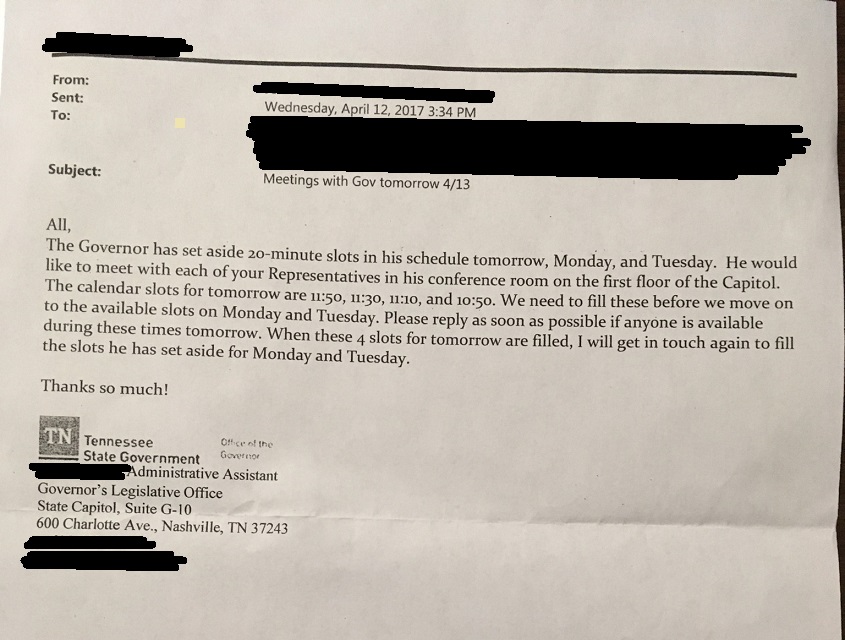 One of the fifteen targeted State Representatives has a message of his own about how he intends to vote on the gas tax increase bill for Governor Haslam.

“The governor can meet with me for 20 minutes, 40 minutes, or for four hours and I will still be a no. There is absolutely no reason to raise taxes on anybody in Tennessee when we have  2 billion-dollars in surplus and recurring revenue,” State Rep. Mark Pody (R-Lebanon) tells The Star.

The fifteen targeted State Representatives who received this emailed invitation from Governor are:

“The value of this list is it tells you who the governor is targeting,  and who taxpayers need to target” one Capitol Hill insider tells The Star.