The war on cash is a war not against criminals, terrorists, and the underground economy alone. It is a war against local economy and the free market in Tennessee – against private and personal commerce.

So take it personally.

People in local economy should feel free to circulate cash, because cash lets us distribute once again portraits of some of our finest statesmen. These notables of American history include Benjamin Franklin on the $100 bill and George Washington on the $1 bill.

Such is my argument the first Friday of every month, Cash Friday, in which I tell people listening to a radio program to go to their bank or credit union and draw out a $100 bill for handy use in buying and selling.

Why would you at the Wal-Mart offer to pay by credit card a $1.75 purchase for a plastic bottle containing a sugary drink? Would it not be better to pass along a very fine engraving of Mr. Washington, one of them, and three quarters (plus the tax in other coin)? It would give you an occasion to say something kind about the one who led the continental army and was the united colonies’ ninth president (the first being John Hanson).

Not only does the user of cash in Chattanooga, Nashville, Knoxville and Memphis celebrate American heroes by circulating green rectangles among common people who are cashiers. He has an added advantage in his person. 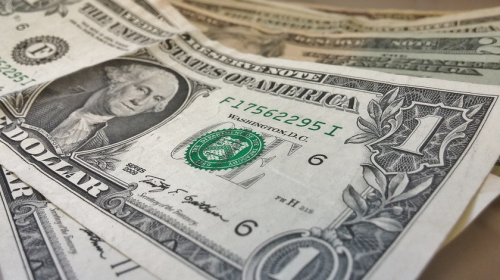 Cash and spending cash is a virile and masculine form of commerce. It leaves transgender forms of commerce, and feminine forms, well behind.

When you use a credit card you are not spending money. You are engaging in a complicated transaction accomplished at lightning speed through computer servers. It is a transaction that does not have the satisfaction of being completed. You will pay for the soft drink at the Wal-Mart for $1.75 three weeks later when the bill comes due from Visa. The drink appears as a line in the paperwork. Then, you write a check, which is an order to your bank to pay digitally the bearer’s demand.

When you pay with piece of green paper printed by the U.S. government at the Bureau of Engraving and Printing, you satisfy a desire in spending money and being done with it.

Of course, currency is not money in the strict sense, in the legal sense. But U.S. currency, in the limited parameter of the integrity of the monetary system, is understood to be money, and everybody calls green rectangles money.

Ben Franklin on the $100 bill was a polymath and an American genius. He was a diplomat for the American colonies in France where he was well loved. He obtained loans for the Continental Congress. He was an inventor and writer.He was a publisher at 16 and is a picture of industry and service. His autobiography, except for a page salacious page of sexual whoring, is must reading for every young person.

It is said that global criminals and drug traffickers favor the Ben Franklin note. A war of ideas has been waged against him by people such as Alan Blinder, a former vice-president who alleges that the only users of cash are crooks. “The Fed has long known most of the $100 bills aren’t in America. It doesn’t take great insight to realize they are being used to finance illicit activities,” he says. The Franklin has received abuse from the likes of Kenneth Rogoff, Harvard economist who published in 2016 The Curse of Cash.

Having a few Franklins in your billfold is innocent and manly. Cash leaves no trail. It does not drain energy after you. It is not like an infertile spermatozoa, with its wiggling tail propelling it along into the void. Cash unites with the seller, conceives and fertilizes the sale, and is done.

Cash satisfies. It is private.

Tennessee local economy likes cash because cash avoid the tapeworm tax. This is the 3 percent to 5 percent tax that the party allowing credit cards collects to use the credit servers that run the whole country.

It’s possible to attack this claim of local economy on the use of cash. A critic would say that cash today can’t possibly satisfy a manly and upfront interest because it is not a legal instrument and Fed notes aren’t real notes. A legal note gives the bearer an authority to collect something real, like a trucker’s manifest represents what’s in the trailer. Up until the 1960s the green rectangle was referential and was a true bill. It gave the bearer of the certificate a claim for lawful money held by the issuer of the note. For example, a note from 1914, the year the Fed was created, says, “The United States of America will pay to the bearer on demand one hundred dollars.”

The estimable $100 Franklin note carries no punch like that anymore. It gives the holder no claim to silver or gold coin held by the issuer of the paper, nor any of his agents.

Still, in the spirit of local economy, which forgets foibles of honorable greats in national economy, we should gladly use paper over electrons, if only to help us recall the physicality that money was, once.

David Tulis is an editor of Nooganomics.com and reports on local economy and free markets at Noogaradio 1240 AM 92.7 FM.

One Thought to “Commentary: The War on Cash is Against Tennesseans and Local Free Markets”