Both the Centers for Disease Control (CDC) and the Population Reference Bureau (PRB) agree that over 500,000 women and girls in the U.S. are either at risk for female genital mutilation (FGM) or have already been mutilated. The CDC estimates that the risk has tripled since 1990, and the PRB estimates rank Tennessee 18th in the country for risk to women and girls from FGM.

The dramatic increase in risk is attributed to immigrants, including refugees, who come to the U.S. from high FGM prevalence countries.

Despite Tennessee’s twenty-one cases of FGM in 2011 cited during discussion of the FGM reporting bill that became law in 2012, the Tennessee Bureau of Investigation (TBI) does not consider this Class D felony as serious as a “lovers’ quarrel” to warrant a break-out category in its annual “Crime in Tennessee” report.

Sen. Bill Ketron sponsored the 2012 bill that now requires immediate reporting of suspected incidents of FGM to law enforcement officials.  Motivated by a sense of moral outrage regarding the practice of FGM, Sen. Ketron told The Tennessee Star that “This is a basic human rights issue. No one should be mutilated in this manner. It’s a despicable act of abuse.”

Importantly, Sen. Ketron said that his bill was intended to “give law enforcement authorities the information to stop this inhumane practice” so that perpetrators of the crime could be identified and prosecuted in an effort to stop FGM in Tennessee.

The Tennessee Bureau of Investigation’s (TBI) “Crime in Tennessee” report, is an annual compilation by county of “crime statistics submitted by all law enforcement agencies across the state” using the Tennessee Incident Based Reporting System (TIBRS).

TBI says that crime information detail enables both law enforcement and the public to “have a thorough understanding of the crimes impacting communities across Tennessee.” 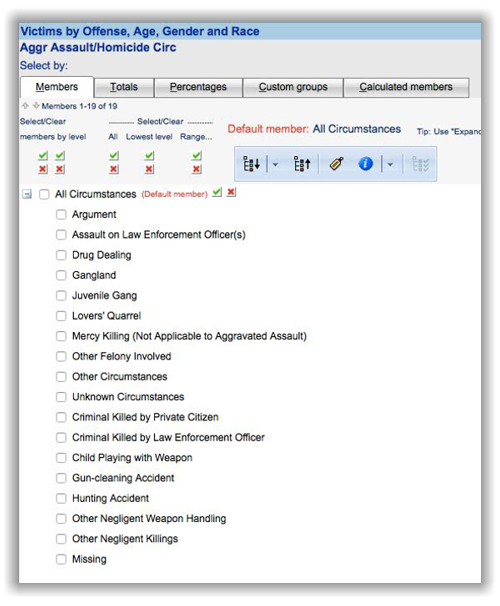 The TBI confirmed to The Star that FGM is reportable to TIBRS under the broader category of “Aggravated Assault” although there is no way to identify FGM incidents in the TNCrimeOnline system within the “aggravated assault” menu, even though the report can identify incidents in categories including “Lovers’ Quarrel,” “Hunting Accident,” and “Juvenile Gang.”

“In incidents reported to our program, we are not necessarily aware of specific details of that nature. Our TIBRS program collects specific demographic and incident information, but does not collect full narratives,” DeVine told The Star.

As explained in the “Crime in Tennessee” report’s cover letter from TBI director Gwyn:

Incident-based reporting views a crime and all of its components as an ‘incident. Information about the crime, including details of the offense, victim, offender, property, arrestees, and the relationship between the people involved, are all reported. Because of the extent of detailed data collected, the TIBRS program provides an even more accurate depiction of crime in each community than the Uniform Crime Report (UCR) published by the FBI.

The Star also asked DeVine “If ‘Lovers’ Quarrel’ could be included as a break-out category within the “aggravated assault” heading, given the specific state law on reporting FGM, why wouldn’t FGM warrant its own break-out category as well?”

“We operate our reporting system by FBI guidelines, to include the variety of fields available to agencies when reporting criminal incidents to the TIBRS program,” DeVine told The Star.

“We have only added two offenses of our own in the past 20 or so years: Stalking and Negligent Vehicular Manslaughter. Incidentally, the latter will be added to FBI data collection in 2018,” he added.

Though Director Gwyn indicates that the TIBRS program “provides an even more accurate depiction of crime” than the report published by the FBI, his spokesman DeVine indicates that TBI has the discretion to add its own category of offenses to detail reporting. DeVine suggests that the absence of an FGM category is somehow constrained by FBI guidelines.

As Sen. Bill Ketron noted to The Star, one of the reasons he sponsored the 2012 FGM  bill “was aimed at getting the reporting in place so this crime could be prosecuted just like other cases of violence are reported and prosecuted.”

According to the TBI’s representative, however, it appears that incidents of FGM are simply being shielded from publicly available data and perhaps even, from other law enforcement and may be undermining the legislative effort to provide a mechanism which, as Sen. Ketron said,  would “give law enforcement authorities the information to stop this inhumane practice, which had been illegal in Tennessee for more than a decade, from occurring.”

5 Thoughts to “Female Genital Mutilation a Felony in Tennessee, But TBI Does Not Document Number of Cases in Annual Crime Report”