CHATTANOOGA, Tenn. — Staff at the county clerk’s office April 20 yielded to a citizen’s demand that he not be barred in making a Facebook video while standing among 35 other Hamilton County residents lined up to get auto tags.

Clerk Monica Brown and sheriff’s deputy Terry Fowler had forbidden this reporter from making a video post for his Noogaradio and Nooganomics.com media outlets. 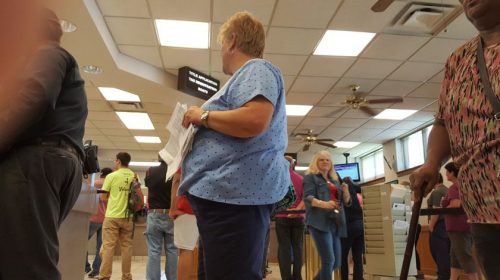 The citizen insisted that under the state and federal constitutions he cannot be molested by officials. “There should not be any effort to block me, stop me, prohibit me, bar me or retard my labors, sir,” he insisted in a 10-minute phone call with Jim Lawrence, the operations manager of the clerk’s office.

“I want to be unobstructed in the use of my equipment in this place where no one has an expectation of privacy.”

“No, we’re not going to allow you to interview anyone in the building,” Mr. Lawrence insisted. “Now, if you would like to be outside, and ask people before they come in or after they exit, that would be one thing. But to actually stand in the middle of the room, no, because that’s just obstructing our work. Our people that come in that we serve are there to come in there to have a quick and peaceable time and not look to be interviewed or anything like that. Outside’s another story, but not within the building.”

The talk show host insisted any member of the public may exercise the liberty he demanded, given that digital media makes everyone with a smartphone a broadcaster and publisher. Is the ban on him not a ban on everyone in the room? he demanded.

Finally, he said the clerk had better be sure of his authority to bar the citizen activity. He was invoking the power of arrest for disobedience of his order. Exercising such police power to quash the exercise of constitutionally guaranteed rights, the writer warned, is forbidden under free speech guarantees and by Tennessee’s “under color of law” statute, TCA 39-16-403, official oppression.

Officials conferred by phone. Mrs. Brown’s voice boomed across the floor, indicating a compromise had been worked out.

“Ladies and gentlemen, could I have your attention? Could I please have your attention?” Mrs. Brown declared that a member of the press is present and intends to make a video for a newscast. If anyone wishes not to be seen in the report, she said, he should simply turn his head. 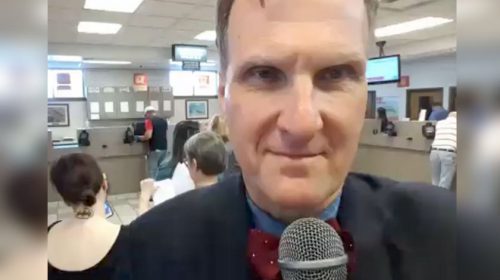 Wearing a bowtie and a press tag on his lapel, this rights-defending so-called belligerent claimant in person stood up, waved to the crowd and identified himself as part of Noogaradio 92.7 FM.

His two-minute Facebook video describes commercial government and explains how free travelers convert themselves into drivers and operators of motor vehicles in commerce subject to state regulation.

Before he left, he had renewed a tag on a van.

David Tulis is editor of Nooganomics.com and reports on local economy and free markets at Noogaradio 1240 AM 92.7 FM.