NASHVILLE, Tennessee–An annual memorial service was held Wednesday in downtown Nashville to honor fallen law enforcement officers and to show appreciation for the police who daily protect the public at risk to their own lives.

The event was sponsored by the Andrew Jackson Lodge of the Fraternal Order of Police and took place at First Baptist Church. The memorial was also held to observe National Police Week, which is May 14-20.

Nashville Mayor Megan Barry thanked officers for putting their lives on their line. 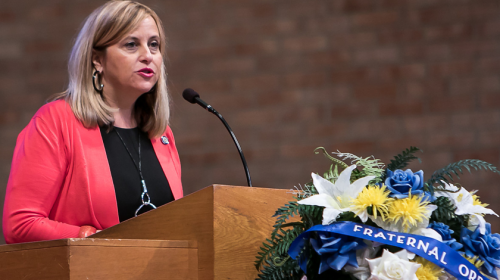 “We can never thank you enough for what you do for all of us every day,” said Barry, who also expressed gratitude to the families of officers for their sacrifices.

In his speech, Steve Anderson, chief of the Metro Nashville Police Department, spoke of Eric Mumaw, the officer to die most recently in the line of duty. Mumaw drowned Feb. 2 while trying to save a drunk and suicidal woman whose car plunged into the Cumberland River in Madison. The woman has been charged in his death.

“If wealth were measured in friendships, Eric would have been wealthy beyond belief,” Anderson said.

Anderson told of a young boy whom Mumaw befriended through a program that pairs officers with underprivileged children to go shopping for Christmas presents for the children and their families. 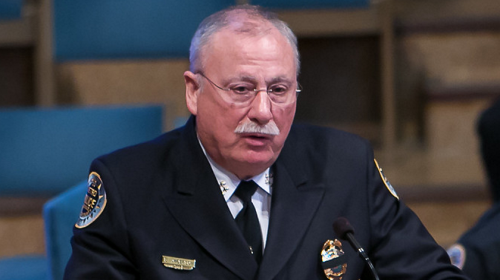 “In describing his interaction with Eric, young Xavier talked about the stuff he got while shopping,” Anderson said. “But most of all he talked about Eric and how much it meant that Eric spent time with him.”

Anderson also mentioned Michael Petrina, who was killed in 2014 while directing traffic on I-65 near Brentwood. Anderson said Petrina’s father had a message he wanted shared at Wednesday’s memorial service. “Always tell those that you love that you do love them. You never know when you will not have that chance,” Anderson relayed.

In addition, Anderson spoke about the need for ceremony and how in America today the importance of ceremony is being lost. He mentioned a new book by historian David McCullough called American Spirit that touches on that theme. He also mentioned Bowling Alone by Robert Putnam, whose research shows that Americans are becoming disconnected. 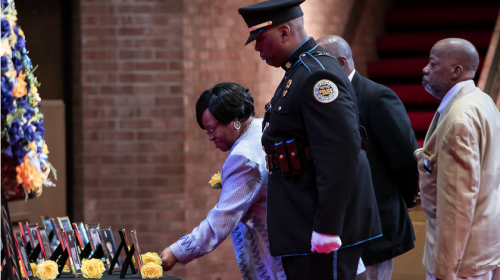 “Whether it is the bowling leagues, the PTA, the political parties, or civic organizations, we do not come together to share our stories, our beliefs, our desires, as we did in times past,” Anderson said.

Wednesday’s ceremony for fallen officers was filled with moving pageantry. There were musical performances and also presentations by the Metropolitan Police Department Drill and Ceremony Team. The names of the 45 fallen officers in Nashville’s history dating back to 1875 were read out loud. Family members of officers killed in recent decades were escorted to the front of the church to lay a flower by a photo of their loved one.

Two police dogs killed in the line of duty were also honored.