Bill Lee, a Republican businessman running for governor of Tennessee, met briefly with Franklin Graham in Clarksville on Thursday to thank him for being an inspiration in his life. 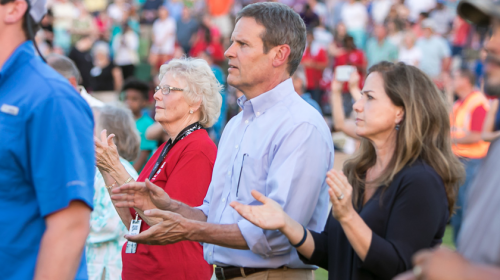 Lee and his wife, Maria, met with Graham on a tour bus for about 10 minutes to talk and pray. The Christian evangelist was in Clarksville as part of his Decision America Tennessee Tour.

Lee told The Tennessee Star that he was moved last year when he heard Graham speak in Nashville. Graham encouraged Christians to become involved in politics and for Lee, already contemplating a run for governor, it was just what he needed to hear. It is Lee’s first run for political office.

Lee said he is impressed with the whole Graham family and twice heard Billy Graham, Franklin Graham’s father, speak in Nashville. The family has a powerful message, Lee said. 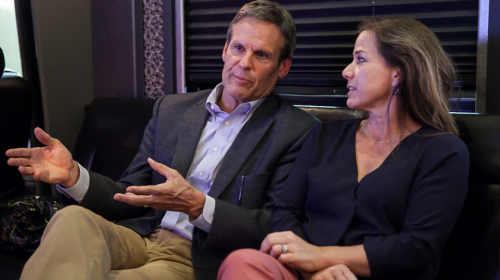 “It’s a legacy that impacts lives,” he said.

Lee is chairman of Lee Company, a facilities and home services company. He also has a background in agriculture and continues to be involved in a cattle farm run by his family.

He lives in Franklin and attends Grace Chapel, a nondenominational church in Leiper’s Fork. Faith is a big part of his life, he said.

Lee has served on the board of several community organizations, including Hope Clinic for Women, Men of Valor Prison Ministry, Fellowship of Christian Athletes, Operation Andrew and others.

Lee and his wife are traveling across the state in a campaign RV to visit with people in each one of Tennessee’s 95 counties. They are meeting with business and political leaders, law enforcement, educators and faith leaders. Earlier in the day Thursday before coming to Clarksville, the couple stopped in Houston County as part of their tour.