IKEA fans in Nashville can look forward to the day when they will no longer have to trek to Memphis or Atlanta to do their shopping.

The Swedish home furnishings retailer has announced that an IKEA store will open in the Nashville area by summer 2020, reports NewsChannel 5.

The store will be built in Antioch, around 13 miles southeast of downtown Nashville, off Interstate 24 at Hickory Hollow Parkway, just south of Bell Road. The 341,000-square-foot store will be located on 36 acres in the Century Farms development. 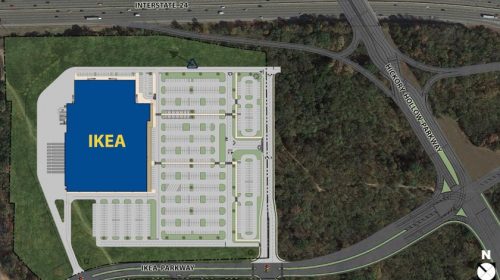 Construction could start in early 2019, officials announced at a press conference Thursday. Permits still need to be approved.

In a news release earlier this month announcing IKEA was submitting plans to Metro Nashville government, IKEA president Lars Petersson said he was excited about the Nashville store adding to the retailer’s growing presence in the southeastern U.S.

“This location would provide our already 140,000 Nashville-area customers their own store and introduce the unique IKEA shopping experience to others throughout Middle Tennessee,” Petersson said.

Construction of the store is expected to create more than 500 jobs and the store would need 250 workers once it opens, the news release said.

The store in Antioch will have nearly 10,000 exclusively designed items, 50 inspirational room settings, three model home interiors and a supervised children’s play area. There also will be a cafeteria serving Swedish specialties as well as American food.

IKEA has more than 390 stores in 48 countries, including 43 stores across the U.S. The IKEA store in Memphis opened in December.

The company was founded in 1943 in a small Swedish village.

You asked for it: #IKEANashville is coming! ?