A delay in getting standardized test results is frustrating school officials across Tennessee as they get ready to send out report cards and wrap up the year.

As a result, many districts are opting not to factor in TNReady test scores for final grades.

The problems come a year after a much larger debacle prompted the state Department of Education to find a new testing vendor, and is the fourth year in a row in which there has been some type of issue.

Complications this year stem in part from some districts not meeting the state deadline to turn in completed tests for grading, forcing state officials to scramble to send back results. But the state could perhaps manage things better by enforcing fixed, staggered testing windows, said JC Bowman, executive director of Professional Educators of Tennessee (ProEd). The state typically sets one testing window for the entire state, which risks having numerous districts simultaneously waiting to the last minute, or past the last minute, to package up the paper tests and send them off for grading.

“Calendar flexibility allowed for smoother administration of the test, but hampered the return of results,” Bowman told The Tennessee Star.

In an email to superintendents this week, education commissioner Candice McQueen said districts could be flexible in how they handle the delays this spring. 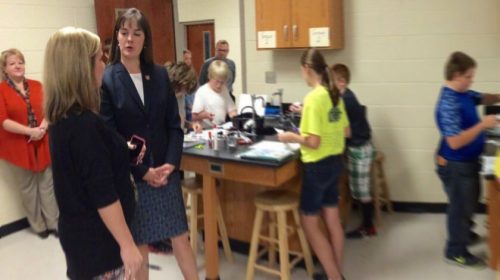 “State statute and state board rule provide for district choice on whether to include TNReady in grades if scores are not received within five days of the end of the school year,” McQueen said in the email. “State law empowers local choice in this decision.”

McQueen said affected districts “may choose whether to include scores for all students, incorporate scores within some grades or courses but not others, or to exclude scores altogether. It is also a district’s choice whether to hold report cards in order to include raw score data.”

Bowman of ProEd told The Star that despite the delays, there were some improvements over last year and that McQueen’s office did a better job of communicating with stakeholders.

“While the delay in results may be disappointing, the new testing vendor and the state seem to have improved the administration portion,” he said. “They just need to get the data back in a more timely manner.”

Last year, technical problems ground an initial round of online testing in February to a halt and the former vendor then missed deadlines to deliver paper and pencil tests for spring.

Bowman said that once all TNReady testing goes online, problems with delays in getting results should be alleviated.