Not only is “Having a Record Year” the title of  one of his latest singles from his self-written “Mr. Misunderstood” album, it also perfectly describes what happened to Eric Church in 2017 on his Holdin’ My Own Tour.  The tour began in Lincoln at the Pinnacle Bank Arena on January 13, 2017, and concluded on May 27, 2017, in Nashville where attendance records were broken on both nights of his two night stint at the Bridgestone Arena. 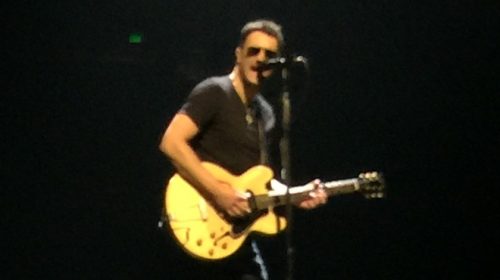 After breaking the attendance record on Friday night, he broke his own record on Saturday night when 19,020 passed through the doors.  Because Church had no opening act and a minimal stage set-up, he was able to sell all the seats in the arena and on the floor.  A veteran security guard said in his five years at Bridgestone, he had “never seen anything like this.”

Eric Church is known for his hard rocking country music which is often autobiographical and encompasses the themes of drinking, women and edgy living evinced by his mega hits “Drink in My Hand,” “Smoke a Little Smoke,” and “That was Cold One.” But being the versatile musician that he is, after opening with a haunting cover of  “Hallelujah,” he performed “Mistress Named Music” with the East Nashville Magnet High School Choir.  He also showed a laxer side singing songs like “Homeboy” and “Three-Year-Old” which is song written about his oldest son.

But fans were not disappointed as reigning king of “Outlaw Country” sang two sets for that lasted well past midnight. He has so many hits, that singing for almost four hours was no problem. Fan Kim,, from Pittsburgh. said she had been to many concerts including the infamous Bruce Springsteen, but “nobody is better than Eric Church.” 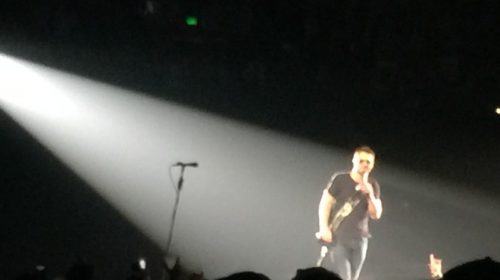 “There are no two concerts alike,” said Church from stage.  In addition to his more than 20 hit singles, Church covered The Grateful Dead’s “Tennessee Jed” and Lady J Dalton’s “16th Avenue.” On Saturday night Eric Church paid tribute to Gregg Allman with a cover of the Allman Brothers Band‘s “Midnight Rider.”

At the beginning of the concert Eric Church said, “If you will give me everything you got, I promise I will give you everything I got.”  After 62 nights of four hour concerts in less than five months, he certainly did give it everything he had.

Bethany Bowman follows country music in Nashville and is the entertainment writer for The Tennessee Star.

One Thought to “Eric Church Has a Record Year”