Americans for Prosperity (AFP) announced Friday it has launched the first in a series of ads calling on members of Congress to “un-rig” the U.S. economy by passing pro-growth tax reform. 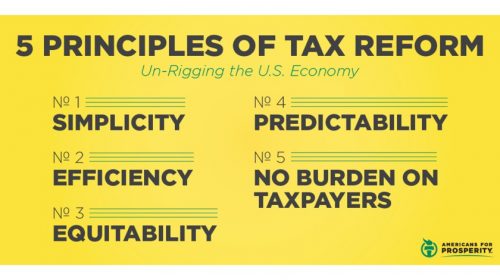 The ad campaign will run in the six-figure range, and appear on digital platforms targeting abut a dozen members of Congress as a part of a summer-long push to shape the House of Representative’s tax-reform efforts around five pro-growth principles.

Rep. Black chairs the Budget Committee and is a member of the House Ways and Means Committee, which will write the tax reform bill the House will consider later this year.

AFP – Tennessee’s State Director Andy Ogles said in a statement, “Americans want a tax system that is honest and fair, which will grow the economy and create jobs.”

We hope Rep. Black will fight back against the current rigged tax system by leading the effort to pass pro-growth tax reform based on AFP’s 5 Principles of simplicity, efficiency, equitability, predictability, and no new burden on taxpayers. That means opposing a border adjustment tax – a trillion-dollar tax on consumers masquerading as a tax on imports.

Included in the first round of ads is one encouraging activists in Tennessee to contact Rep. Diane Black and tell her to “support AFP’s plan to un-rig the economy.”