FRANKLIN, Tennessee – A new poll released by The Tennessee Star conducted by Triton Polling and Research of 1,007 likely Tennessee Republican primary voters shows that the party’s nomination for governor in 2018 is wide open, as no announced or likely candidate has the support of more than 10 percent of likely voters. More than 60 percent are undecided. 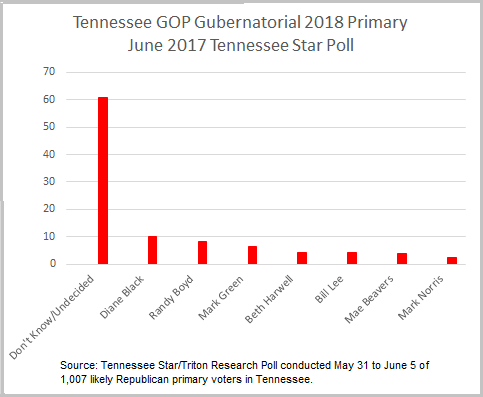 Since the poll has a margin of error of 3.1 percent, six of the seven candidates included in the poll are in a virtual tie for the lead.

Mark Norris is the only candidate not in the statistical tie, but he is barely below the range of support found among the other six candidates polled.

The poll began before Mark Green withdrew from the race. His announcement came midway through the poll.

“Several things jump off the page when looking at the poll numbers for the governor’s race in the Tennessee Republican primary,” media consultant and political analyst Steve Gill tells The Star.

“First, it is wide open at this point with 60 percent of likely Republican voters up for grabs,” Gill says.

“The single digit support for each candidate also underlines the lack of name ID and awareness of each candidate. They all have pretty much a blank slate to define themselves and their opponents. Those with money who can do that sooner rather than later will have a significant advantage,” he adds.

But money is not the only factor that will play in the outcome of the August 2018 Republican gubernatorial primary.

“The ideological split among the candidates will be important, too,” Gill adds.

Boyd has specifically used the term “moderate” to describe himself, as The Star reported previously.

“But if one of the conservatives can successfully make the case that THEY are more in line with the conservative agenda, then one could emerge  ahead of the pack,” Gill adds.

“Mae Beavers, because of issues, and Diane Black, because of resources, are the ones most likely to do that,” Gill says.

Voter intensity is likely to play a significant role in the outcome of the 2018 Tennessee Republican primary for governor.

“Voter intensity on key issues will have a huge impact on where voters ultimately end up,” Gill tells The Star.

“Right now we see high and intense support for Trump among Tennessee Republican voters. Depending on whether that support is maintained and how his key issues play out over the next year, the Trump factor may play a big role in several GOP primary races,” Gill concludes.

Those results will be released on Wednesday.

The poll, which was commissioned by The Tennessee Star and conducted by Triton Polling and Research in an automated (IVR) telephone survey of 1,007 likely Tennessee Republican Primary voters between May 31 and June 5, has a margin of error of plus or minus 3.1 percent.

You can read the gubernatorial head-to-head match up question from page 2 of the top line poll results, as well as pages 1, 4 and 5, here: