Nearly three-quarters of a century ago on June 6, 1944 the United States joined with Great Britain, the free French forces, and Canada to mount a bold invasion of the beachhead in Normandy, France as a last-ditch effort to gain a foothold in Europe against the conquering forces of Hitler’s Germany.

The 160,000-soldier seaborne operation would mark a massive pivot in the Allies’ defense against the Nazis and the bloodthirsty Axis.

The National World War II Museum has a developed a moving collection of photos, reports, and personal accounts of that day by the men who were there:

For over two and a half years the Allies planned and gathered their military strength to hurl into the decisive amphibious invasion of northern France and strike a mortal blow against the empire of Nazi Germany. In anticipation, Adolf Hitler stockpiled reserves across French coastlines into the Atlantic Wall defenses, determined to drive the Allied forces back into the sea.

There will be no second chance for the Allies: the fate of their cause hangs upon this decisive day.

After bad weather forces a delay, an expected break in the weather for Tuesday, June 6, is reported to General Dwight D. Eisenhower at rain-lashed Southwick House at 21:30 hours on the night of Sunday, June 4. Eisenhower makes the decision only he can make: Operation OVERLORD is unleashed by the Supreme Commander to begin the liberation of Europe from Hitler’s Third Reich.

At the time, is was not known the operation would be a success. 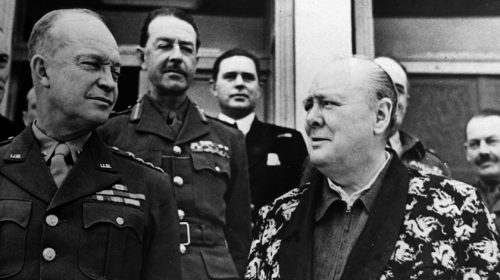 This vast operation is undoubtedly the most complicated and difficult that has ever occurred.

Facing savage weaponry, heavy losses and an experienced, battle-hardened enemy, the Allies ultimately overran the Nazis at Normandy in this singular turning point that would be hailed as the beginning of the end of War.

Read more about this important day at http://dday75.org/timeline/.