Wayne Gretzky visited the Ford Ice Center in Antioch on Tuesday to see the inaugural Gretzky Hockey School in action.

More than 90 kids are participating in the summer training camp, run by Gretzky’s son, Ty. 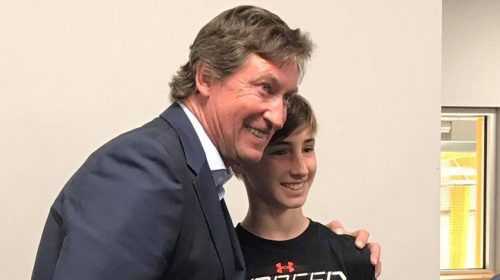 The National Hockey League Hall of Famer, known as “The Great One,” signed autographs and had his photo taken with fans, reports WKRN News 2.

“We would like to give a big thank you to Wayne Gretzky for stopping by to meet the boys and girls attending the Gretzky Hockey School! It was an experience of a lifetime,” the Ford Ice Center posted on Facebook.

The Canadian-born star, now 56, retired in 1999 after twenty seasons playing on four teams in the NHL.

Ty Gretzky told WKRN he’s impressed with the enthusiasm of the kids in the program, which he attributed in part to the hype surrounding the Nashville Predators vying for the Stanley Cup.

“It is very special for them to be able to feel this right now as it is going on,” he said.

Ty is one of Wayne Gretzky’s five children with his wife Janet.

“Gretzky’s proudest role is as a father and a husband,” his website says.