Former commissioner of the state Economic and Community Development turned gubernatorial candidate Randy Boyd, who has publicly described himself as a “moderate,” is now appealing to conservatives for support through a recent direct mail campaign.

“I’m probably the most hated, disrespected, untolerated political entity in existence,” Boyd said, continuing, “I’m a moderate,” according to an April 2015 interview with the Knoxville Mercury. 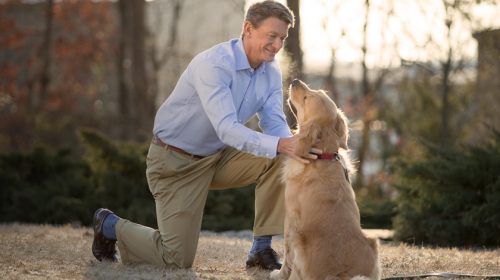 Apparently, Boyd now considers himself a conservative, as he makes references to conservatives and conservative values in all four pages of his four-page letter as well as the sheet intended to be returned with a financial contribution or volunteer sign-up.

The mailing was packaged in a standard letter-sized envelope, with about a quarter of the front conspicuously covered with a picture of Randy Boyd accompanied by the statement, “I’m not a professional politician. I’m a businessman. That alone won’t elect me as Tennessee’s next Governor. But it’s a darn good place to start.” 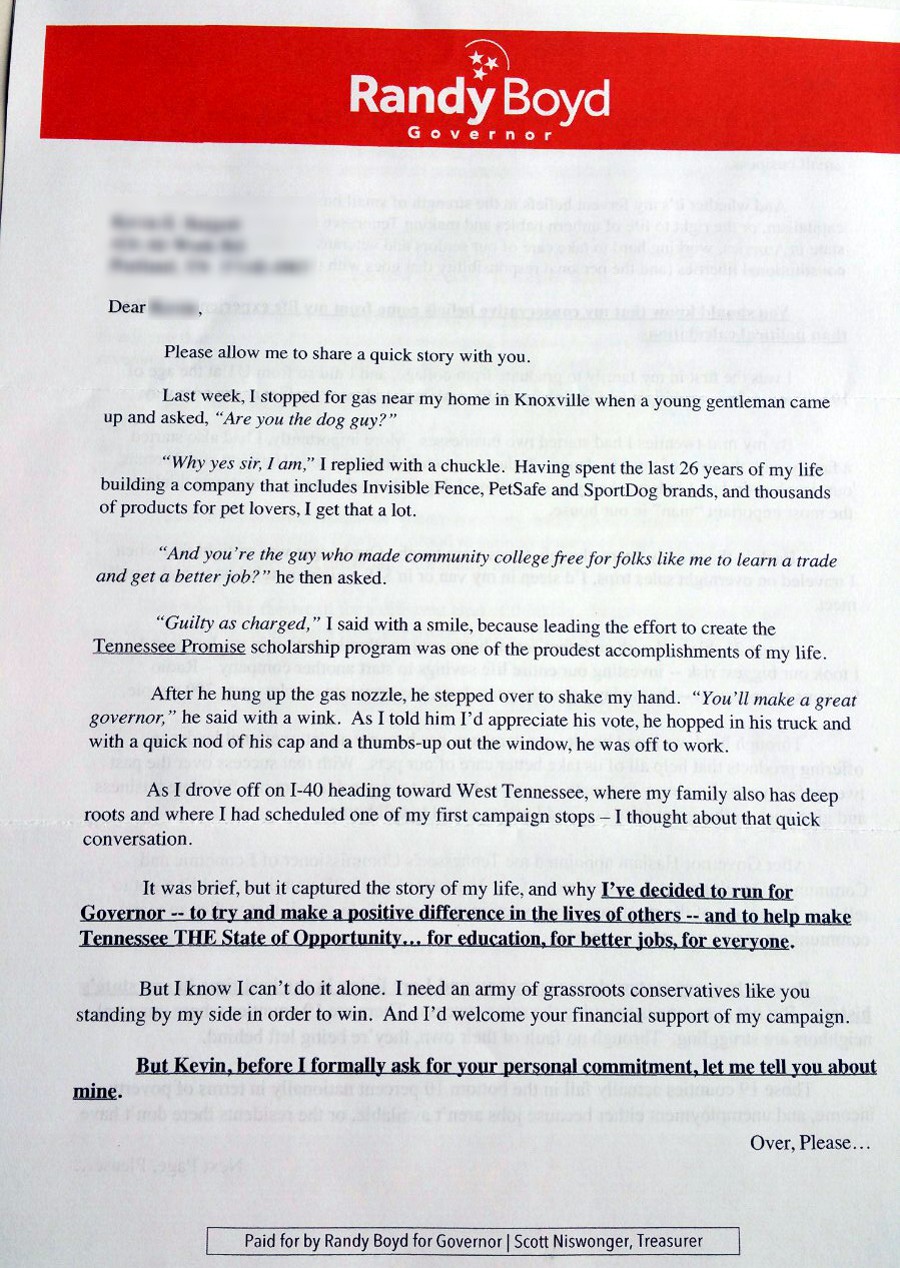 The enclosed letter starts off with an appealing story about a young man who recognized Boyd at a gas station as “the dog guy” who made “community college free.” After addressing why he decided to run for governor – “to try and make a positive difference in the lives of others” – Boyd goes on to say that he needs “an army of grassroots conservatives like you standing by my side in order to win.”

Boyd’s life story is emblematic of the American dream, starting work at a young age, being the first in his family to graduate college, early in fact, and putting his young family’s life savings on the line to build a business that eventually achieved $350 million per year in sales. All of that seems to go along with his statement, “You should know that my conservative beliefs come from my life experiences, rather than political calculations.”

And while Boyd may not have been elected, he has been in the political arena for more than three years as an appointee of Governor Bill Haslam, first as special advisor in higher education for a year and then two years as Commissioner of the Department of Economic and Community Development (ECD). 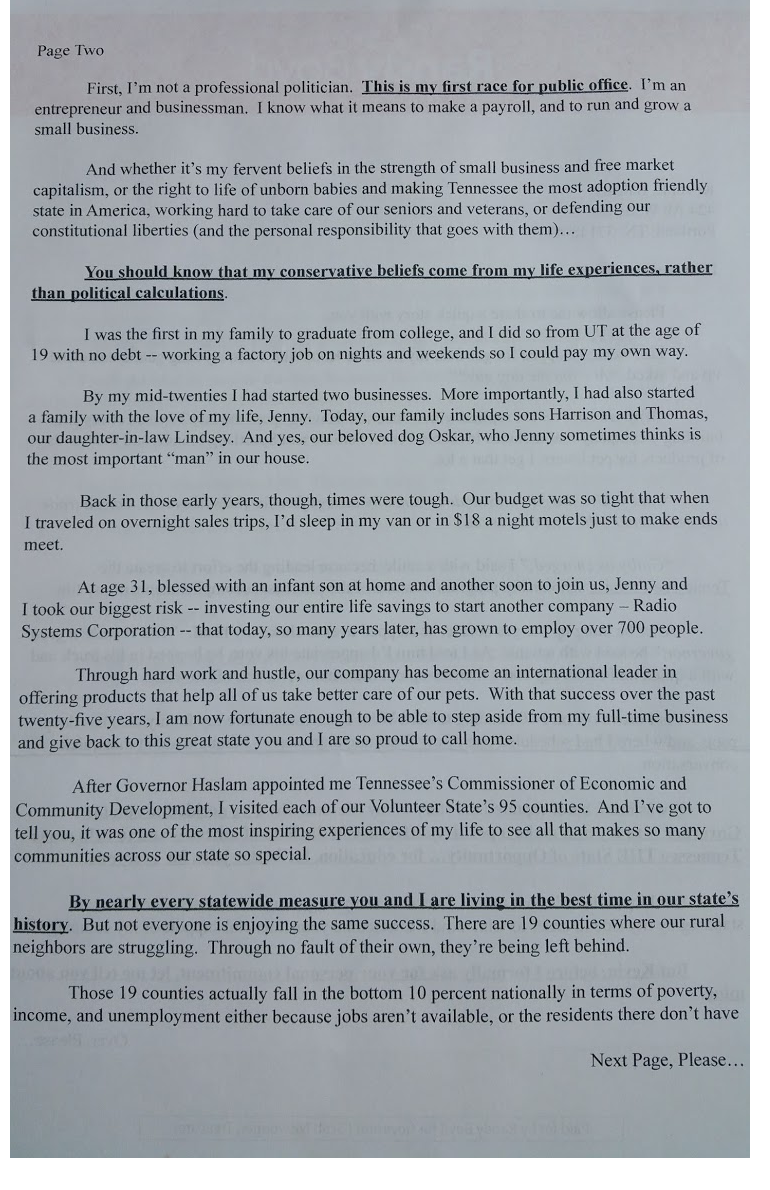 The very nature of the Department of Economic and Community Development, often referred to by conservatives as “corporate welfare,” is in direct conflict with a statement in Boyd’s mailer alluding to his “fervent beliefs in the strength of small business and free market capitalism.”

As ECD Commissioner, Boyd oversaw a $200 million budget for corporate welfare programs, including $30 million in each of his two years to the failed TNInvestco program, which had an initial taxpayer “investment” of $200 million. A 2016 Tennessee Comptroller’s Office audit report revealed that, among other findings within the ECD, through 2015 that the $200 million “investment” in 2009 had only recouped 2.6 percent or $5.3 million of the initial amount, therefore, losing nearly $195 million taxpayer dollars.

A “staunch supporter of Common Core,” as the Knoxville Mercury reported, opponents to the federal takeover of K-12 education would find it no small surprise that Boyd would then also be responsible for the Tennessee Promise and Drive To 55 secondary education programs to compensate for the failed primary education program. The many critics of Common Core would also recognize the glaring inconsistency of a supporter like Boyd making the statement that “the best government is that which is closest to the people.” 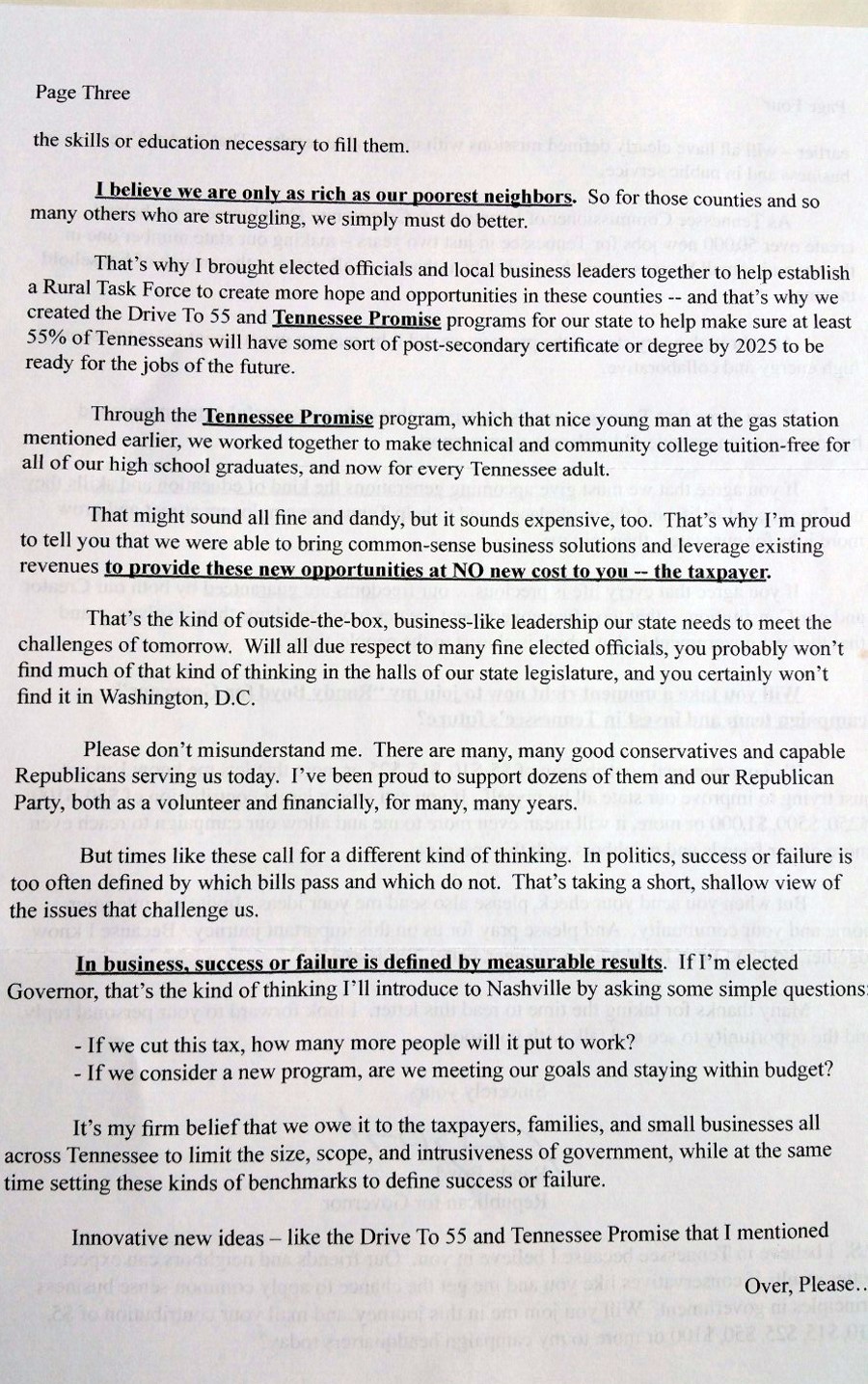 While stating in one paragraph, “leading the effort to create the Tennessee Promise scholarship program was one of the proudest accomplishments of my life,” Boyd’s letter later says programs like Drive To 55 and Tennessee Promise “will all have clearly defined missions with measureable results,” leaving the reader questioning why those criteria weren’t established when he launched the programs.

Perhaps the most puzzling aspect of the mailer was the request for financial contributions, given Boyd’s prior statements implying he would self-fund his campaign. Before making his official announcement to run for governor, in February Boyd said, “Nobody is going to be able to out-invest me. So I don’t really have to worry about finances,” and that “I’m prepared personally to commit to whatever it takes to be successful.”

The combined contribution and volunteer response form says, “I agree that Tennessee needs leaders who will apply sound business principles to make government smaller, more efficient and more cost effective for the people it serves,” implying that is what a Governor Boyd would deliver.

Boyd says he will ask some simple questions, “If we cut this tax, how many more people will it put to work?” and “If we consider a new program, are we meeting our goals and staying within budget?” 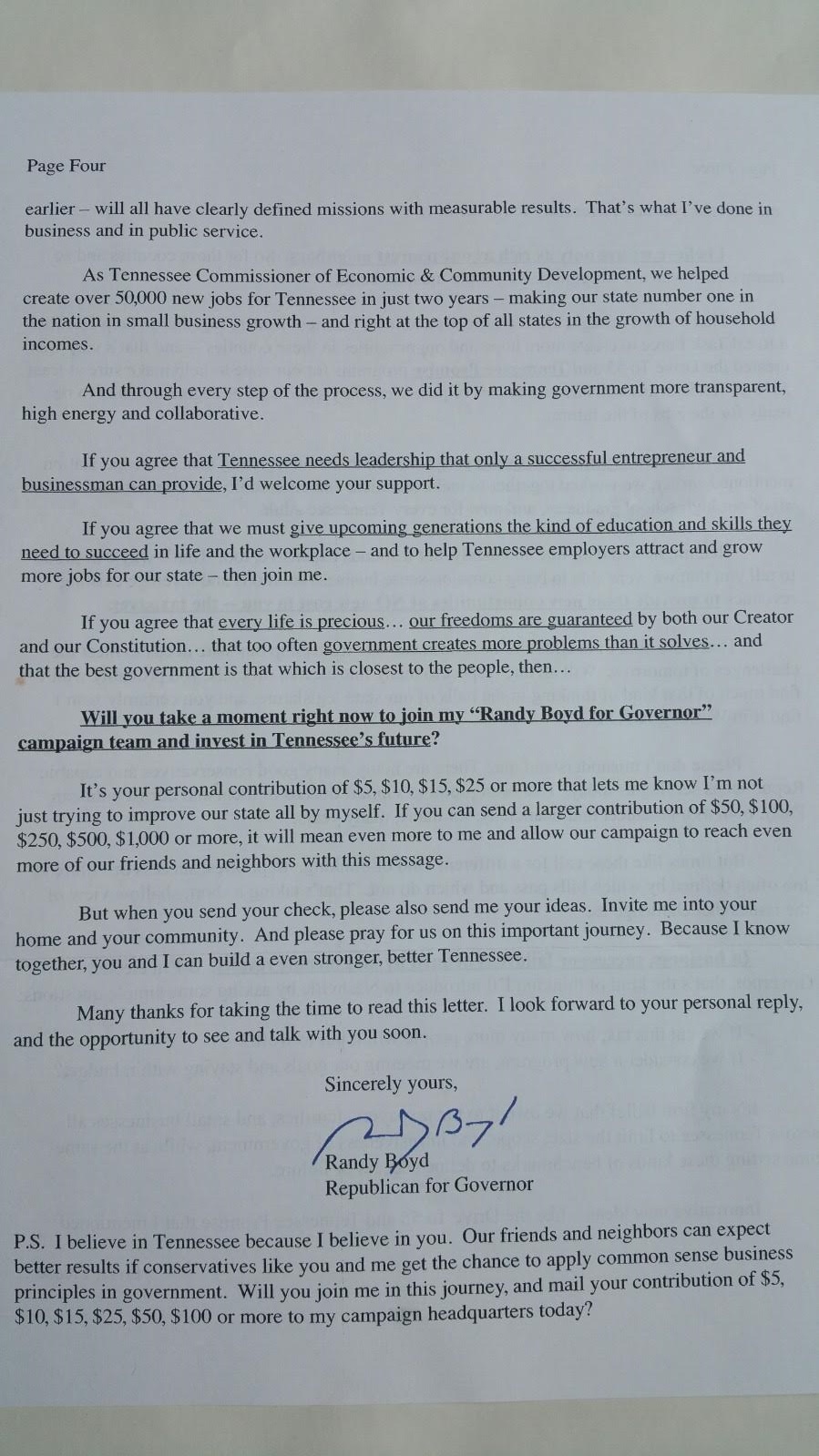 Staying within budget is a constitutional requirement, but that didn’t stop the growth of government under Governor Haslam going from $29 billion to $37 billion.

Boyd’s letter doesn’t say how he’ll address the growth of government, the recent gas and diesel tax increases or the billion dollar surplus due to the over collection from Tennessee taxpayers.

Rather, the letter’s primary focus is on the free community college programs, which was the model for President Barack Obama’s proposal for a federal-state partnership and later introduced in liberal states such as New York, California, Illinois, Washington, Connecticut and Massachusetts.

You can see a larger version of the mailer in PDF format here: