Nashville area pastor Stan Mitchell is among those at the annual meeting of the Southern Baptist Convention in Phoenix this week to try to persuade Southern Baptists to embrace LGBT activism.

Mitchell is the founding pastor of GracePointe, a nondenominational evangelical church in Franklin that made national news in 2015  when it began to offer gays all the privileges of membership, including marriage. The church touts itself as “a progressive Christian community.”

Mitchell is involved with Faith in America, an advocacy group that believes that “LGBT people should be removed from the sin list,” according to a May 31 news release. The group claims that conservative Christians are harming LGBT youth by making them feel bad about their sexual orientation, which the group says has led some young people to kill themselves.

“Southern Baptists Must Change (and they are not the only ones),” Mitchell posted on his Facebook page June 9.

The group is allowed to protest outside the convention hall in Phoenix as long as activists do not block access, Oldham said. The annual meeting is being held Tuesday and Wednesday. 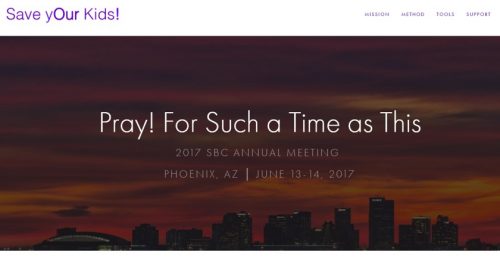 Faith in America has launched a three-year program called “Save yOur Kids!” which  is designed to “address religious-based practices that condemn our teens and youth, creating hostile environments both at church and home, places most needed by our youth,” according to the group’s literature.

Group founder Mitchell Gold said in a June 2 news release that “this is not about conflict and division. It is about speaking the truth, and standing up for our kids and teens being hurt.” In the same news release, Stan Mitchell, the Franklin pastor, said that “the more we can get religious people to the realization that sexual orientation is an innate part of a person, a natural part of a human’s being, not a choice, that dramatically undermines the basis for viewing homosexuality as behavior-driven immorality or some perverse proclivity.”

But Southern Baptist leaders are not backing down from their position that the Bible considers homosexual behavior a sin.

In a prepared statement quoted by the Arizona Republic, Russell Moore, head of the Southern Baptist Ethics and Religious Liberty Commission, said the church has “stood for the dignity of all human persons for decades,” but that Southern Baptists will “not ignore the teachings of Jesus himself.”

“To minimize or adjust a Christian sexual ethic would be to abandon the very message Jesus handed to us, and we have no authority to do this,” Moore said. “As Baptists, we want to be the first to be known by our love and compassion to those in the world around us, but we also must hold fast to the ‘faith which was once for all delivered to the saints’ (Jude 1:3).”