Twenty-five out of thirty-nine members present at Tuesday’s Metro Council meeting voted to pass the Mendes/Sledge ordinance forward to a third reading and final vote at the next regularly scheduled Council meeting.

The ordinance will, in effect, turn Nashville into a “sanctuary city,” and set up an inevitable confrontation with both the state and federal government. It is also in line with the left-wing, open borders, pro-illegal immigrant political philosophy of Nashville Mayor Megan Barry, a Democrat.

The vote was preceded by impassioned statements both pro and con; some more factually accurate than others.  Admissions were made that parents are not taking their children to be immunized, victims of domestic violence complaints are not coming forward and there is pervasive fear of interacting with law enforcement. Councilman Scott Davis claimed that downtown hotel cleaners aren’t getting paid because they’re told “you’re illegal. I don’t have to pay you.” 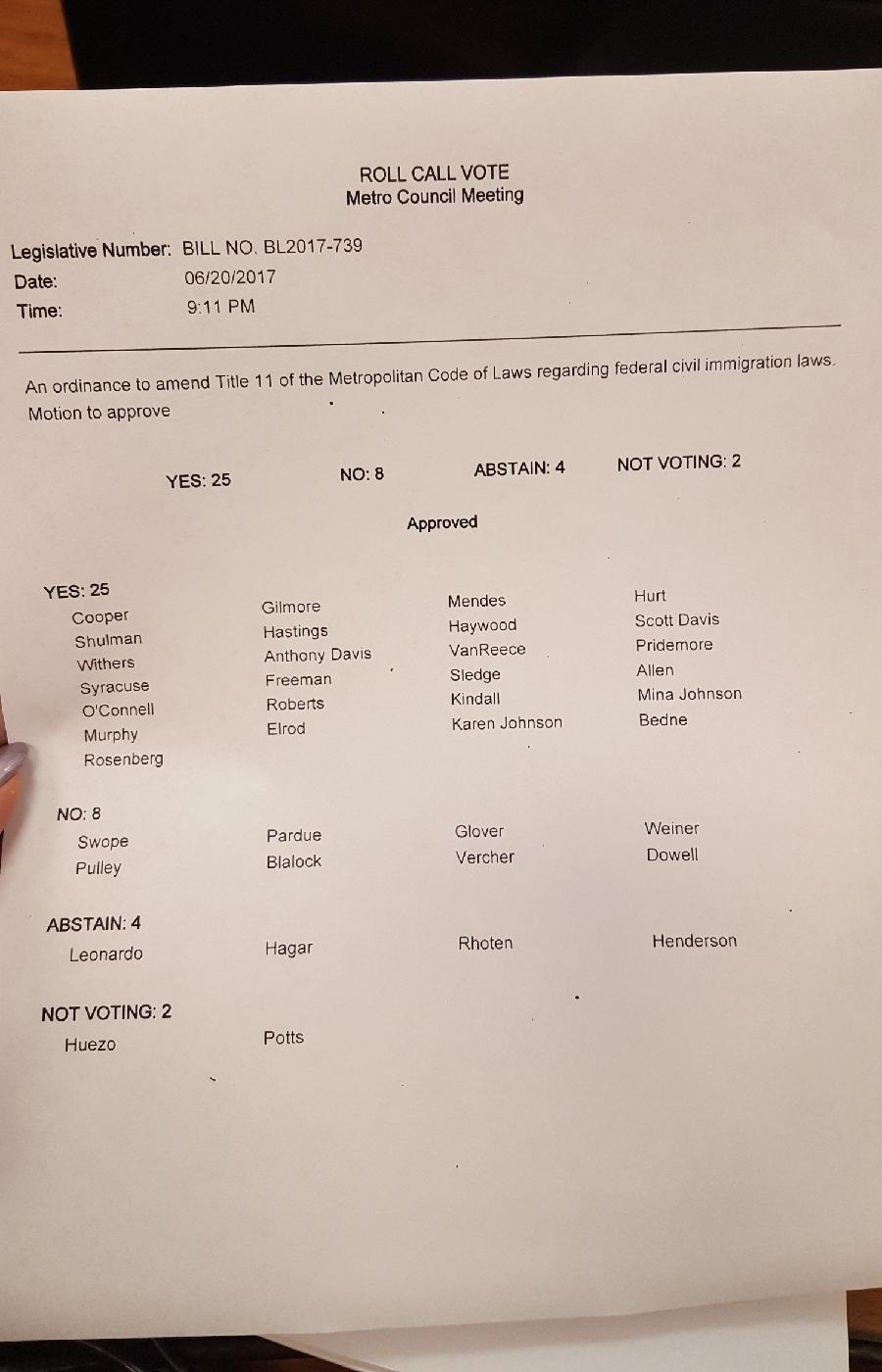 The general theme running through supporters was this bill would make the city safer for everyone, “citizens or not,” phrasing used by Councilman Mendes to avoid the legally accurate term “illegal alien.”

Mendes claimed that cities are allowed to “have choice” regarding how much they do over and above federal and state law and that his bill will not classify Nashville as a sanctuary city. He emphasized that “these are our neighbors” and we are to “treat all our neighbors as our own.”

Cooperating with ICE requests to detain criminal aliens is voluntary and is just one of the needles Mendes’ bill threads. Should his bill pass, no illegal aliens in Davidson County, regardless of the crime committed, would be detained in cooperation with ICE.  His co-sponsor Colby Sledge referenced the “hundreds of cities that have taken the step” Nashville is trying to do.

Openthebooks.com tallies 106 sanctuary cities, labeled as such because they choose not to cooperate with federal immigration authorities by reporting “aliens in custody.”

Robert Swope who represents Metro District 4 and who worked for the Trump campaign, offered the most comprehensive objection to Mendes’ sanctuary-styled bill, reminding his colleagues that “Nashville is not an island surrounded by a blue ocean.” Swope reads the bill as giving preferential treatment to a criminal class by putting criminal aliens above the law.  He predicted that if the ordinance passes on the final vote, the state will pass legislation nullifying it because “we are purposefully provoking the state yet again.”

Councilman Fabian Bedne, the first Latino elected to the Metro Council, blamed President Trump’s Executive Order for forcing the Council to consider the Mendes/Sledge bill. Bedne claimed that if the bill wasn’t passed Nashville would be forced to jail 33,000 people for 180 days at a cost of over $44 million.

The irony of her own statement seemed lost on Mina Johnson, one of the fourteen co-sponsors of BL2017-739 who after acknowledging her own legal naturalized immigration status, said the bill was necessary to help, protect and “make them feel safe” because the “people are already here.”

Nashville Sheriff Hall has publicly stated that as an elected constitutional officer the Metro Council lacks authority to dictate how he operates the jail. He plans to continue cooperating with ICE detainer requests issued for criminal aliens.

At large council member John Cooper conceded that it may be within the sheriff’s discretion to abide by the ordinance as it relates to detention and sharing of information regarding criminal aliens but that Metro Legal has not issued a definitive opinion yet.

Countering that position, Metro Council attorney Mike Jameson said that an argument can be made that the ordinance would apply to the sheriff’s office but that he is still researching the issue. The question may very well boil down to whether Metro Nashville has the authority to dictate what a state employee can and cannot do.

Sheriff Hall has indicated that if necessary, “I’ll pursue it to a courtroom to get it settled.”