After looking at polls showing Republican Karen Handel might lose to Democrat Jon Ossoff in the race for the 6th district congressional seat in Georgia, Burke packed her bags and headed for the Peach State to volunteer.

Having worked on the Trump campaign, Burke knew polls can’t always be trusted. But she didn’t want to take any chances.

For nearly two weeks, the Franklin woman worked the phones, went door to door, put out signs and attended rallies. She was still in Georgia Tuesday night when Handel, a businesswoman and lifelong conservative, was declared the winner of the hard-fought race.

“We just had a ball,” Burke told The Tennessee Star Wednesday morning. “My throat is sore from screaming last night.” 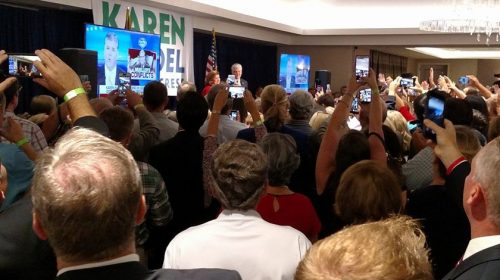 Handel’s victory in the special election was a huge setback for Democrats, who spent more than $30 million to back Ossoff, a documentary filmmaker and former Capitol Hill aide. It was their fourth consecutive loss in special elections, the other three being in Kansas, Montana and South Carolina. The defeats spell trouble for Democrats in the 2018 midterm elections.

“They learned they cannot buy an election,” Burke said of the Georgia race. “They cannot run a liberal who wants to pretend he’s a moderate and trick the voters.”

Burke said much of Ossoff’s funding came from New York, Massachusetts and California, which didn’t sit well with Georgia voters.

Democrats were out of touch with the electorate, not realizing that standing by President Trump’s agenda was a positive, not a negative, for Handel’s campaign, Burke said. The philosophies and obstructionist tactics of the left are turning many off, she said.

Burke spent most of her time in Georgia working the phones. She doesn’t like to rely on robocalls, believing a personal conversation or voicemail message is better. That’s what is needed to build relationships with voters and encourage the participation of every voter in a household, she said.

“Sometimes that’s all it takes to get out those extra votes,” said Burke, who credits the National Federation of Republican Women for doing a lot of the important volunteer work for Handel’s campaign. She also noted that there many volunteers from Tennessee.

Voter turnout was high for the race, which was held to replace Tom Price, now Trump’s health and human services secretary.

The 6th congressional district includes many northern suburbs of Atlanta and has been a Republican stronghold for decades, represented for many years by Newt Gingrich. It’s one of numerous areas across the South that Democrats are seeking to break and turn from red to blue.

Congratulations to Karen Handel on her big win in Georgia 6th. Fantastic job, we are all very proud of you!