After the rally, attendees will go inside the Courthouse for the Council meeting in anticipation of the vote on the third reading. 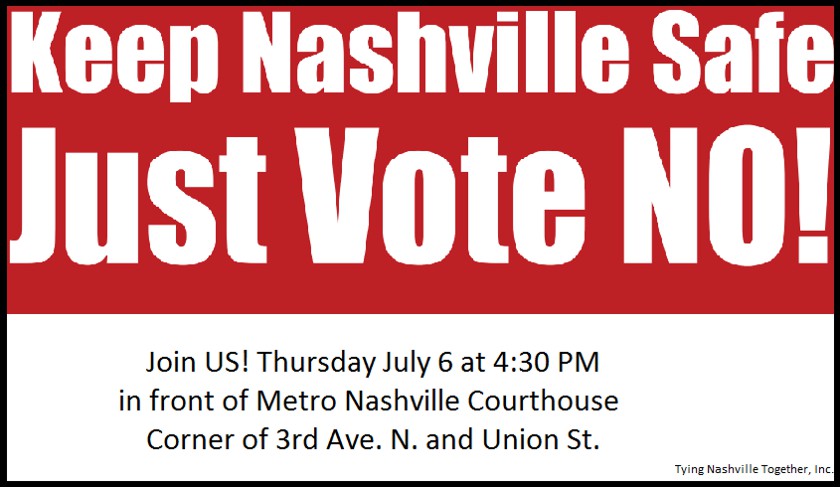 T-shirts saying “Keep Nashville Safe. Just Vote No,” will be available at the rally.

As The Star reported, the Metro Nashville Council voted 25 to 8 in favor of the proposed ordinance at a second reading held at its June 20th meeting.

On Monday, organizers formed a 501 (c) 4 non-profit organization, Tying Nashville Together, Inc., whose sole purpose will be to stop the sanctuary city bill.

A website and Facebook page will be up soon, organizers tell The Star. Founding board members will be announced later this week.

On Monday, “Sixty-three members of the 99 member Tennessee House of Representatives, all Republicans, released a statement opposing the passage of a proposed sanctuary city ordinance by Metro Nashville Council,” the Star reported.

With the Second Reading of the Ordinances filed by Metro Councilmen Bob Mendes and Colby Sledge having passed and a vote pending from the Metro Council, we are compelled to make public the intent and purposes of this Ordinance and to make it known that as Representatives of the State of Tennessee, we soundly object to their passage. Tennessee is currently being represented by the Thomas More Law Center in a lawsuit questioning the ongoing practice of settling refugees in Tennessee through various non-governmental organizations without the proper vetting, channels or protocol being followed,” State Rep. Judd Matheny (R-Tullahoma), State Rep. Bryan Terry (R-Murfreesboro), and State Rep. Sheila Butt (R-Columbia) said in a statement released on Monday from Matheny’s office.

“It is entrusted to the General Assembly to keep the citizens of our state safe, keep Tennessee financially sound, and to enact laws that will accomplish that end. We will not hesitate to act if these Ordinances should pass,” the statement concluded.