“Inside the county, the support has been overwhelming for these bills,” he said at a press conference Wednesday, where he announced he will withdraw the bills because of growing opposition and a legal opinion issued Monday by Metro’s lead attorney that presented obstacles.

Mendes said the bills had become “a political football” among candidates for office, specifically mentioning the Republican primary for next year’s gubernatorial election. All of the announced and anticipated candidates spoke out against the bills.

The opposition became so fierce, with many state legislators opposed and also a budding grassroots movement, that Mendes’ claim of broad support within Davidson County is likely debatable.

Mendes and other supporters vowed Wednesday to find non-legislative ways to achieve the same ends.

“Our goals are unchanged,” he said.

Those goals are at odds with the direction many in the country and across Tennessee want to take with the challenges posed by illegal immigration, leaving Mendes and his like-minded colleagues isolated in Nashville’s liberal enclaves. President Trump, whose tough talk helped him win the White House, called Wednesday for Congress to follow his lead and crack down on cities that shield illegal immigrants.

In addition to growing public opposition, Metro’s law director issued a formal opinion Monday saying that the council cannot legally prevent the sheriff from cooperating with immigration officials. Mendes acknowledged that the opinion was “damaging” to his cause, but pledged to “move to advocacy with that office so they can change their policies.”

Mendes said the sheriff’s office is “out of step” with other Davidson County authorities, including Mayor Megan Barry, the district attorney and the police department, who Mendes credited with making Nashville a welcoming city. He did not say what his advocacy with the sheriff’s office would entail.

One of the bills would have required the sheriff to get a criminal judicial warrant to detain inmates believed to be in the U.S. illegally, instead of simply following procedures established by Immigration and Customs Enforcement (ICE). While regarded as friendly to illegal immigration, Barry asked the council on Tuesday to reconsider the bills in light of the legal opinion issued Monday. Sheriff Daron Hall opposed the bill and said he wouldn’t change his detention practices.

The bill would have prevented local government from using resources to help enforce immigration laws, or to inquire about immigration status, except when required by state or federal law. Mendes and other proponents said the bill would not make Nashville a sanctuary city because of the clause about abiding by state and federal law when necessary. But critics said state and federal laws prohibit cities from creating policies that in any way restrict cooperation with federal immigration authorities. Without recognizing cooperation as a fundamental principle, Nashville would essentially function as sanctuary city, they said.

The second bill, which had been deferred until August but will now also be withdrawn, would have ended a contract allowing the Davidson County Jail to be used as an immigration holding facility. 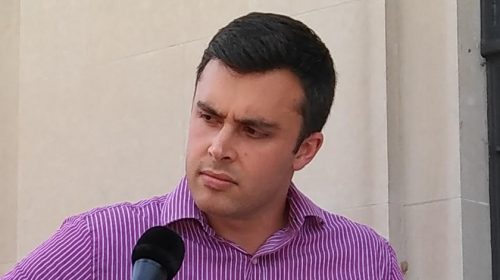 Councilman Colby Sledge, a lead sponsor of the bills along with Mendes, said at Wednesday’s press conference that supporters need to continue conversations about what the bills were designed to accomplish. He mentioned the 2009 defeat of an English-only measure that was put before voters and said Nashville needs to reflect on whether it is still the welcoming and inclusive city it was at that time.

“We’ve had a lot of voices come from outside tell us who Nashville is and that’s not who we are, but we’ve got to make the decision as to who we are in the months and the years ahead,” Sledge said.

The Tennessee Immigrant and Refugee Rights Coalition (TIRRC) helped the councilmen draft the bills and brought a small group of supporters to the press conference Wednesday, where they held a banner and signs on the steps of the Metro Nashville Davidson County Courthouse. Stephanie Teatro, co-executive director of TIRRC, said that while it’s apparent the bills “are not the vehicle to solve this problem, the city of Nashville still has a big problem to be solved.”

Dulce Castro, an illegal immigrant who has lived in Nashville since she was 7 years old and is a college-bound recent high school graduate, addressed reporters and said she was speaking on behalf of other immigrants like her.

Castro said she worries that her parents “will be stopped by the police and be booked for driving without a license” and that it will be the last time she sees them.

“Every immigrant family here works hard,” she said. “There is no difference between us and you, other than an immigration status.”

Castro said her family is “here to stay.”

While real-life accounts like Castro’s are meant to appeal to the emotions, there are also emotional true stories coming from people who want to see immigration laws enforced.

Maureen Maloney of Massachusetts spoke Tuesday at the National Press Club in Washington, D.C., about her son, who was killed in 2011 by a drunken, unlicensed illegal immigrant from Ecuador in a traffic accident. She was there to help launch a group called Advocates for Victims of Illegal Alien Crime (AVIAC), according to CNSNews.com.

“My son is dead because politicians and local jurisdictions have put illegal aliens ahead of American citizens,” Maloney said.