Renata Soto, is the co-founder and director of Conexion Americas, a named partner affiliate of the National Council of La Raza (La Raza). In 2015, she was made Chairman of La Raza’s board and the following year, gubernatorial candidate Randy Boyd donated $250,000 to her Nashville organization. Shortly after Trump was elected President, Soto announced that she would begin organizing against the new administration by starting an “Indivisible” chapter in Nashville.

“I invite you to join INDIVISIBLE, a campaign bringing together concerned Americans who commit to protect the promise of an indivisible nation that celebrates the roots and possibilities of all its people,” Soto wrote in a December 2016 op-ed published in The Tennessean.

On Friday, Soto will hold another ‘Indivisible’ event at the Conexion Americas building Casa Azafran.  Among the activities promoted at the event, attendees of all ages are invited to “RAISE YOUR VOICE Write postcards to our legislators supporting the principles of an INDIVISIBLE community.”

Nashville Mayor Megan Barry’s early support for the ‘Indivisible’ campaign is no surprise given her own left-wing open borders, pro-illegal immigrant political philosophy.

Just stopped by @Conexion_tn to see @RenataSotoTN for hot chocolate and churros. Be sure to stop by before 6:30pm to be in mural. pic.twitter.com/dyWdMl0anP

‘Indivisible’ organizers are working to obstruct President Trump’s agenda for the nation including the enforcement of U.S. immigration laws. The Indivisible Guide written by former congressional staffers, provides a road map to the resistance.

“To this end, the following chapters offer a step-by-step guide for individuals, groups, and organizations looking to replicate the Tea Party’s success in getting Congress to listen to a small, vocal, dedicated group of constituents. The guide is intended to be equally useful for stiffening Democratic spines and weakening pro-Trump Republican resolve,” the Indivisible Guide begins:

We believe that the next four years depend on Americans across the country standing indivisible against the Trump agenda. We believe that buying into false promises or accepting partial concessions will only further empower Trump to victimize us and our neighbors. We hope that this guide will provide those who share that belief with useful tools to make Congress listen.

Traditionally, a sanctuary policy is one that limits the extent to which police will help federal immigration authorities deport people. But increasingly, communities are thinking more broadly about the concept of sanctuary, and pushing their local elected officials to not only stop police from collaborating with ICE, but to make a wide range of changes to improve the lives of immigrant communities and to promote racial justice more broadly.

A few examples of local sanctuary policies include: 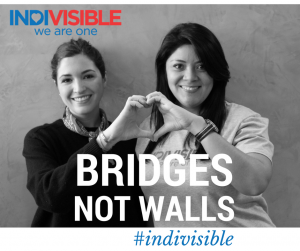 Conexion America’s Indivisible campaign, which is featured prominently on page 2 of the organization’s 2015-2016 annual report appears to be following the step-by-step guide offered in the Indivisible Guide for “individuals, groups, and organizations looking to replicate the Tea Party’s success in getting Congress to listen to a small, vocal, dedicated group of constituents.”

The two Metro Nashville Council ordinances that were withdrawn aligned with these same examples of sanctuary city policy even though Bob Mendes, the chief sponsor of the ordinances claimed they would not make Nashville a sanctuary city.

However, Colby Sledge, a primary co-sponsor of the bills with Mendes, signed onto an April 4, 2017 letter sponsored by Local Progress, The National Municipal Policy Network, vowing to “reaffirm our commitment to maintaining and expanding sanctuary policies.”

Soto’s opposition to Trump is in line with Boyd’s vocal disdain for then candidate Trump. Boyd waited to post his opposition to sanctuary cities until after Metro’s Legal Director issued his opinion that the ordinance was not enforceable. Days before Boyd posted his message to Facebook, 65 Tennessee House members, 9 Tennesse Senators, 2 announced gubernatorial candidates, and one imputed gubernatorial candidate had already condemned the proposed Metro ordinances.

Boyd is a named member of the Partnership for a New American Economy. They issue reports that highlight the economic contributions of legal immigrants and illegal aliens over native-born Americans. These reports are used by sanctuary jurisdictions to support shielding illegal aliens from deportation.

Last week, radio host David Thompson, 92.3 FM in Knoxville, interviewed Boyd and asked him about his $250,000 donation to Conexion Americas which Thompson described as having “loose ties to a group I don’t like at all.” Boyd said he “really appreciate[d]” being asked about that, but then proceeded to deflect the question into one about supporting entrepreneurs.

Boyd never admitted whether he knew about Soto’s leadership of La Raza when he gave her Nashville organization enough money to double the size of her kitchen operation. Instead of answering Thompson’s underlying question, Boyd sounded like he was justifying his continued entanglement with Soto who is a board member of his Complete Tennessee non-profit:

The important thing here is that sometimes there may be people we disagree with on many things but we need to find the things we agree on and then expand those… helping entrepreneurs start businesses is a good thing.

Then Boyd’s comment took a strange turn when he compared the enforcement of U.S. immigration laws to accessing dog parks he helped establish in Knoxville:

We in Knox County can’t be policing our dog parks and make sure that only the people we think should use them use them.

Boyd is thought my many to support in-state tuition for illegal alien students. His membership in the PNAE and his entanglement with a La Raza affiliate, all taken together, has raised questions about his credibility on issues related to illegal immigration. Among critics it has earned him the moniker, “La Raza Randy.”

6 Thoughts to “La Raza Affiliate That Randy Boyd Gave $250,000 Is Holding Another Anti-Trump Event in Nashville”