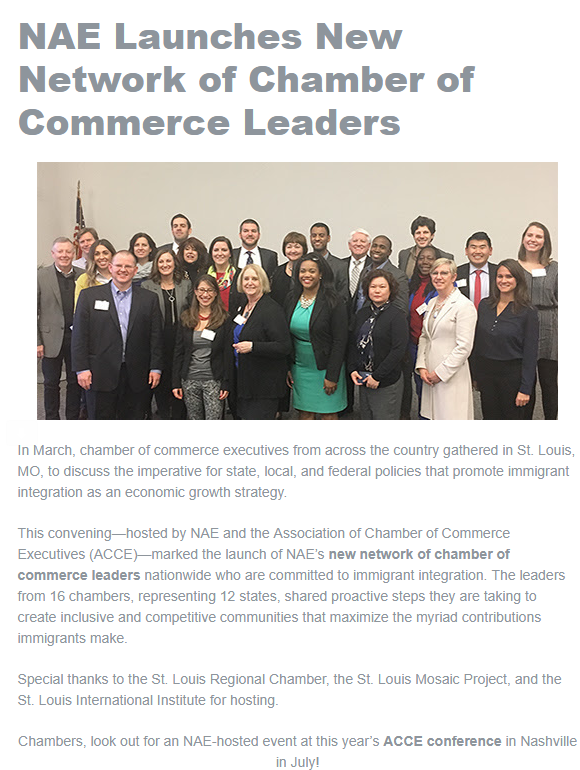 It was also on display in St. Louis in March, when “The New American Economy (NAE) and the Association of Chamber of Commerce Executives (ACCE) came to St. Louis on March 22-23, 2017 to learn from the St. Louis Regional Chamber,the St. Louis Mosaic Project, the International Institute of St. Louis, and Welcoming Economies Global Network (WE Global).”

The St. Louis event in March launched a joint NAE and ACCE project to network chamber of commerce leaders to focus on “the imperative for state, local, and federal policies that promote immigrant integration as an economic growth strategy.”

During the ACCE convention in Nashville on Sunday, the NAE will be hosting an event similar to the one held in St. Louis using the opportunity to share its brand of advocacy for comprehensive immigration reform which highlights the work ethic and perceived business ambitions of legal and illegal immigrants over native-born Americans.

The local participants in the March gathering in St. Louis included some of the most aggressively pro-refugee, pro-immigrant activist groups in the country.

The International Institute of St. Louis a local refugee resettlement agency, and is part of a national network connected to the US Committee for Refugees and Immigrants. The Institute’s stated purpose is to:

provide essential community integration services to each new wave of immigrants to St. Louis. We strive to serve all immigrants without regard to country of origin, race or religion. We believe that America becomes even stronger when we embrace new cultures and traditions. Our purpose is also to create a more welcoming community and shared prosperity for all residents.

The St. Louis Mosaic Project’s goal as stated on its website, is to “transform St. Louis into the fastest growing metropolitan area for immigration by 2020 and promote regional prosperity through immigration and innovation.”

Its mission is “to strengthen the work, maximize the impact, and sustain the efforts of local economic and community development initiatives across the region that welcome, retain, and empower immigrant communities as valued contributors to the region’s shared prosperity.”

NAE appears to share the same world view as these organizations. The organization’s globalist, open borders approach to economic growth is consistent with its support for the 2013 “Gang of Eight” immigration bill and the NAE’s renewed push for comprehensive immigration reform.

The ACCE’s alliance with the NAE is not a big stretch for either organization since they share the same disappointment with the American-born work force. The ACCE’s website on “Low-Skilled Labor” relies on an NAE report to support the claim that “[t]he U.S. economy is facing a demographic crisis” which can only be rescued with legal and illegal immigrant workers:

In a report by the Partnership for a New Economy, A Crucial Piece of the Puzzle: Demographic Change and Why Immigrants are Needed to Fill America’s Less-Skilled Labor Gap (PDF), it lays out the scenario likely to create a low-skilled worker shortage. Key findings of the report include:

The Nashville Chamber of Commerce, a named member of NAE and recipient of its “Gateways for Growth” funding, will moderate and participate as panelists in several of the workshops offered during the ACCE convention here in Nashville on July 16, including:

Your Chamber is a Community Thought Leader
As chambers shift their paradigm to one of reshaping society, community, and economy, developing a robust internal research center provides the strength for problem solving and ushering change. This edge positions chambers as innovators and leaders. Hear the case for creating centers of innovation within chambers and their potential to change internal thinking and processes and present creative new solutions.

Think Tank: A Welcoming Approach to Workforce
Chambers of commerce are leading initiatives to welcome immigrants because they bring new energy, ideas and talent to local economies. Learn more about efforts to boost regional prosperity through immigration and innovation.

In advance of Sunday ACCE annual convention in Nashville, the ACCE’s Spring 2017 journal featured a “Spotlight on Nashville.”