Tennessee State Senator and Majority Leader Mark Norris (R-Collierville) has been tapped by the Trump Administration to sit on the Federal District Court for the Western District of Tennessee. 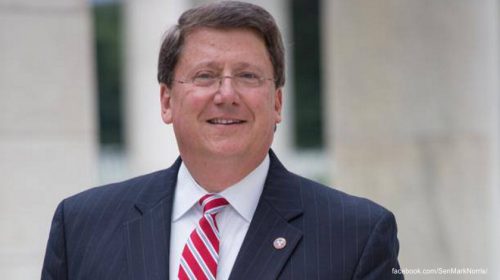 In a statement, Senator Norris said:

I am honored by the nomination and appreciate the President’s confidence in me. This is just the first step under the Constitution, and I look forward to the Senate confirmation process. In the meantime, I will continue to serve the citizens of the 32nd District who elected me to the Senate and my Senate colleagues who elected me as their Leader.

Rep. Diane Black (R-TN-06) and Tennessee Speaker of the House Beth Harwell are expected to enter the race within the next several months.

The Tennessee Star reported last month that Norris’ name was likely on a short list on judicial nominees.

Norris will now undergo the confirmation process in a United States Senate in which the minority Democrats have exhibited an unprecedented level of obstructionism in delaying confirmation of Trump nominees.

Given that obstructionism, it may take some time before Norris’ receives a confirmation vote. However, with his stellar reputation and strong backing, Norris is likely to ultimately be confirmed, no matter how long the process takes.

Attorneys William L. (“Chip”) Campbell, Jr. and Eli J. Richardson round out the Tennessee delegation with their nominations for District Judge on the United States District Court for the Middle District of Tennessee.