During the ‘Made in America Showcase’ Monday, Gibson Guitars was chosen by the White House to represent the great products in Tennessee. 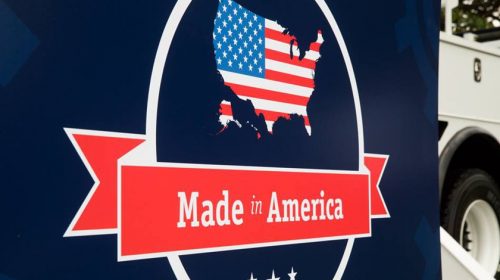 “We’re here today to celebrate American manufacturing and to showcase the amazing products from all 50 states, made in the USA, President Trump said, standing among a wide array of items, including a display of Gibson guitars.

“Remember in the old days they used to have ‘Made in the USA,’ ‘Made in America?’  We’re going to start doing that again.  We’re going to put that brand on our product because it means it’s the best.”

President Trump’s “Made in America Product Showcase” featured products made in each state, including Koloa Rum from Hawaii, baseball bats from Louisiana, NASA space suits from Delaware, and maple syrup from Vermont.

Monday’s celebration the all-things-American-made is a continuation of President Trump’s ‘America First’ theme, a central tenant widely credited for his victory in 2016.

“Made in America is more than a label or a product, and it’s just something so important to us.  It’s a stamp of excellence,” President Trump said.

It’s a badge of honor and a tribute to the tremendous skill of the working men and women who design and build these incredible masterpieces and different products of all types. 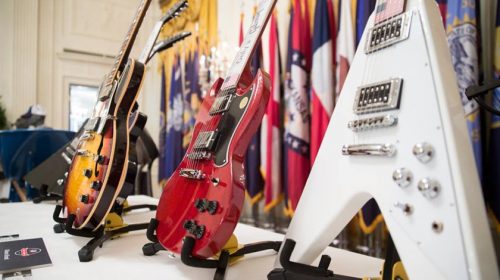 When American workers have a level playing field, they cannot be beaten.  They have not had a level playing field in a long time.  But you see what’s happening.  It’s step by step.  We’ve gotten rid of regulations and a lot more are coming.  We have some statutory requirements where we’re not allowed to do it until certain dates.  But they’re coming as fast as those dates come.  We’ve opened it up, and it’s made a big difference for the farmer, for the homebuilder, for so many — and for the manufacturers.

That’s why we want to ensure the integrity of the Made in America label.  My administration is committed to working with the private sector to ensure the protection of Made in America and the label through efforts like certification, greater transparency, and stricter enforcement efforts by agencies like the Federal Trade Commission.

We will have zero tolerance for illegal counterfeiting, piracy, theft, or intellectual property.

And they, really — they take our intellectual property like we’re a bunch of babies.  But no longer.  And false claims that a product is made in America.  And as time goes by, the value of Made in America is going to be greater and greater, so you’re going to see more and more of this.  There was a time when people didn’t want to use that name and they wouldn’t take that name.  Now they’re taking it, and that’s because it’s become — we’ve become very proud of it again.

The Made in America movement is growing rapidly under my administration, and we’re more determined than ever to protect our jobs, our industry, and our workers.