Former Tennessee Governor Winfield Dunn was the recipient Thursday of the Howard Baker Award at the annual Statesmen’s Dinner held by the Tennessee Republican Party. 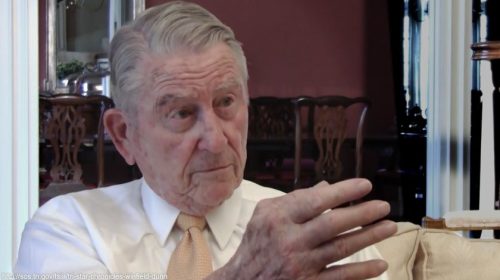 Dunn, 90, served as governor from 1971 to 1975, and was the first Republican elected to the office in 50 years. He was born and raised in Mississippi but later moved to Memphis, where he became a dentist. After serving as governor, he moved to Nashville permanently and worked for 10 years managing government and public relations for Hospital Corporation of America (HCA). He ran for governor again in 1986 but lost to Democratic Ned McWherter in the general election.

Dunn’s conservative views were influenced by Barry Goldwater’s 1960 book, The Conscience of a Conservative, and concerns about the spread of communism. As governor, he was known for unifying the state’s three major regions with fair distribution of government resources, and for a lack of corruption, which had been a problem in the past. He started new departments in state government, including the Tennessee Housing Development Authority, and spent money on new initiatives. But he didn’t see such measures as conflicting with his conservative ideals, saying they were for needed projects.

Howard Baker, for whom the award Dunn received is named, was a U.S. senator from Tennessee from 1967 to 1985. He was the state’s first popularly elected Republican senator. He was majority leader from 1981 to 1985 and after leaving the Senate, served as President Ronald Reagan’s chief of staff and later as ambassador to Japan under President George W. Bush. Baker was known for being a bridge builder between the two major political parties. He died in 2014 at age 88.