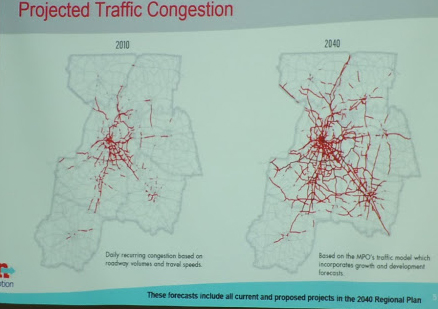 The slide includes two maps, shown here, using red to highlight the “daily recurring congested” areas within middle Tennessee. The map on the left, portraying the current situation for daily recurring congested areas, is described as being “based on roadway volumes and travel speeds” and reflects what middle Tennesseans are painfully aware as locations for commuter traffic delays.

Comparatively, the map on the right dated 2040 is captioned, “Based on the MPO’s (Metropolitan Planning Organization’s) traffic model which incorporates growth and development forecasts,” after an additional one million people are expected to migrate to the Nashville area over the next twenty-plus years.

Shockingly, the projected congested areas in 2040 is after a whopping $8 billion is spent on transit and other improvements, according to Steve Bland. Indeed, the slide is subtitled, “These forecasts include all current and proposed projects in the 2040 Regional Plan.”

Bland, who dubbed the information “the slide of doom,” did not elaborate on the specific projects that would be completed for the $8 billion and has not responded to requests for additional information.

In September 2016, the RTA approved the nMotion Transit Plan, which includes a combination of light rail, bus rapid transit (BRT), rapid bus, regional rapid bus and other service improvements, implemented over a period of 25 years throughout the middle Tennessee area, with a stated estimated cost of $6 billion.

Governor Haslam’s IMPROVE Act, with its gas and diesel tax hikes as well as motor vehicle registration fee increases, is expected to raise revenues for transportation in excess of $300 million per year. And, while the gas tax increase as a “user fee” was promoted as the only appropriate way to fund roads, of the seven uses for the revenues derived from the IMPROVE Act’s imposed tax and fee increases, two of them are related to transit.

(a) (4) Support local government investment in transit programs to improve regional transit services across the state and help manage congestion along major highways;

(a) (5) Assist rural transit providers in improving the efficiency of demand response services;

Of significant note, “fund the development and construction of the projects listed in subsection (b)” appears last in the list of 7 uses for the additional revenues, referring to the 962 projects in all 95 counties, which was touted as the sole need for and beneficiary of the IMPROVE Act’s fuel tax and fee increases.

The IMPROVE Act requires that each county develop its own plan that includes not only the transit plan itself, but how it will be funded, then put it to referendum for the citizens to approve.

An element not required by the IMPROVE Act, but should be made available to citizens in the plan they will be expected to fund and presented to them to vote on through referendum, is the forecasted improvement in the local traffic congestion. Although, the point may be moot, as MTA/RTA CEO Steve Bland conceded, “Transit will not fix traffic problems.”

2 Thoughts to “RTA CEO: ‘Daily Recurring Congested’ Areas To Get Much Worse in Metro Nashville, One Million People And $8 Billion Later”