That’s the only way our country can move beyond the conflicts we’re experiencing, said Swain, echoing a message she has given in interviews on Fox News in the aftermath of violent clashes in Charlottesville, Virginia, on Saturday between white supremacists and radical leftist counterprotesters. On Fox, Swain defended President Trump for blaming both sides.

Swain said Tuesday that the ranks of those attracted to “white identity and white consciousness” is growing, but that it’s illogical to maintain that blacks, Hispanics and Asians can promote an identity for themselves rooted in race, but that whites can’t. The solution, she believes, is to support and promote an American identity to cultivate a unifying bond.

Tickets for Tuesday’s luncheon at the DoubleTree Hotel sold out. With 85 people attending, it was the largest quarterly luncheon gathering the Rutherford County GOP has hosted. Tuesday also marked Swain’s last official day as a law and political science professor at Vanderbilt University. But Swain has no plans to retire from writing and traveling to give speeches.

Although Swain faced opposition at Vanderbilt because of her conservative views, she said Tuesday that she wasn’t pushed out, but rather, at age 63, was looking for new challenges after teaching for 28 years.

Swain believes her fellow conservatives also need to rise to new challenges. She encouraged her audience Tuesday to read, or re-read, George Orwell’s 1984.

“What you see taking place in our society with the destruction of history and monuments and with the language codes, all of that is straight out of George Orwell,” she said. “We’re moving, I think, toward a totalitarian society.” 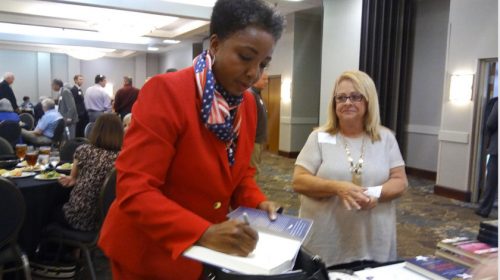 In addition, Swain said conservatives need to use their resources to promote their beliefs, including Christian beliefs. The mega-donor Koch brothers are focused on free enterprise, not Judeo-Christian values, Swain noted.

Swain asked her audience why so many conservatives continue to send their children and grandchildren to universities that have become progressive and hostile to Christianity and conservativism, without doing much of substance to stop the progressive influence.

Vanessa Pasos was among those who attended Tuesday’s luncheon to hear what Swain had to say. Originally from Nicaragua, Pasos came to the U.S. as a teen years ago and today works as a loan processor in Murfreesboro.

Pasos said she admires Swain for the respectful and clear way in which she presents her views.

Here are two Fox News interviews Swain has given about Charlottesville: