Tennessee Gov. Bill Haslam is advocating for the removal of a bust of Nathan Bedford Forrest from the Capitol in Nashville.

“My position on this issue has not changed – I do not believe Nathan Bedford Forrest should be one of the individuals we honor at the Capitol. The General Assembly has established a process for addressing these matters and I strongly encourage the Capitol Commission and the Historical Commission to act,” Haslam said in a statement issued Monday. 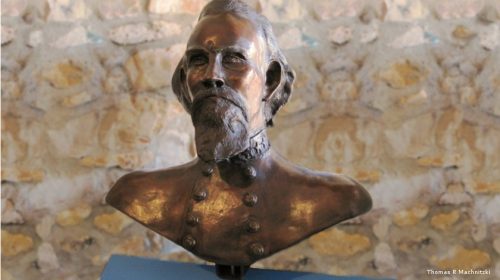 A Tennessee native, Forrest was a lieutenant general in the Confederate Army during the Civil War. Also a slave trader, Forrest was known for his brutality. According to some accounts, he became a Christian later in life and distanced himself from the KKK, which he helped start.

Activists in many states are calling for the removal of Confederate monuments after violent clashes between white supremacists and leftist radicals on Saturday in Charlottesville, Virginia.

Dozens of protesters gathered at the Capitol Monday to demand that the bust come down, according to Nashville Public Radio. The bust was installed in the 1970s and ever since there have been calls periodically to remove it, the last time being after the Charleston church shooting in 2015.

State Sen. Jeff Yarbro (D-Nashville) was at the protest and told Nashville Public Radio that Tennessee needs to deal with its past involvement in slavery, including the buying and selling of slaves in Nashville.

“We got to take that seriously, because what I think we saw this weekend is that, when you fail to deal with your history, when you suppress that, we’re letting these things come out, letting violence out,” Yarbro said. “We have to be better than that.”

Meanwhile, the city of Memphis is pressing its case to remove a statue of Forrest from a city park, reports WREG News Channel 3.

Memphis City Council voted to remove the statute in 2015 but the Tennessee Historical Commission denied the request. City officials plan to appeal at the next meeting of the state board in October, and have said they’ll take their fight to the Tennessee Supreme Court if their appeal isn’t granted. The statue of Forrest was dedicated in 1905.

Memphis city officials also want to remove a statue of Jefferson Davis, the Confederate president, located in another park. That statue was put up in the 1960s. Activists have also been pushing for the removal of both statues.

The push to remove Confederate monuments wherever they are found has been growing in recent years, as well as a movement to remove those recognizing other historical figures deemed offensive. Last October, more than 200 protesters gathered at the Museum of Natural History in New York to demand the removal of a statue of Theodore Roosevelt and the renaming of Columbus Day. The activists called the statue of Roosevelt an affront to African Americans and Native Americans. In 2015, a petition was created at the University of Missouri to remove a statue of Thomas Jefferson because he owned slaves.

20 Thoughts to “Gov. Bill Haslam Calls for Removal of Bust of Nathan Bedford Forrest from the Capitol”