U.S. Rep. David Kustoff (R-TN-8) on Wednesday denounced white supremacy during a visit to Jackson as a small group of protesters stood outside.

Speaking at a Chamber of Commerce event at the Jackson Country Club, Kustoff, who is Jewish, said:

We know that our nation has had a rough several days after the events in Charlottesville this past weekend. Make no mistake – White Supremacists, the KKK, neo-Nazis and all groups that preach hate, prejudice, racism and bigotry have no place in our country and must be explicitly condemned. As a United States Attorney, I prosecuted federal hate crimes. I strongly encourage the Department of Justice to follow through on the investigation from last weekend’s events. 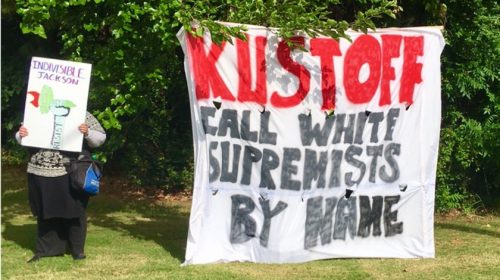 Outside, several protesters with Indivisible Jackson held signs reading, “Racism, White Supremacy Are Not Acceptable,” “No Trump, No KKK, No Fascist USA” and “Kustoff, Call White Supremacists By Name.”

In an interview in March With Jewish Insider, Kustoff expressed support for President Trump, citing measures related to national security and immigration and saying, “Everything he’s done, he promised. He’s following through on his commitment from the campaign.” Kustoff said he would give the president an “A.”

When he joined Congress earlier this year, Kustoff became the second Jewish Republican along with Rep. Lee Zeldin (R-NY). 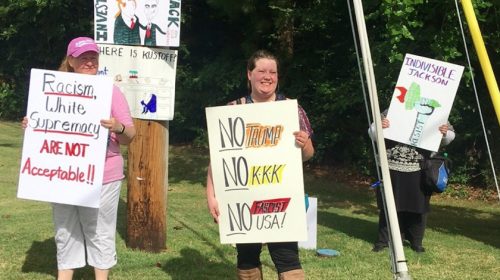 In May, Kustoff and an aide were followed and harassed by a woman as they were leaving a town hall meeting at the University of Tennessee-Martin. Wendi Wright, who was upset about Kustoff’s vote to repeal Obamacare, was arrested and charged with felony reckless endangerment. Wright had made Kustoff and his aide feel like they were going to forced of the road and after they stopped and pulled over, Wright allegedly started screaming and hitting the windshield of their car.

Wright later accepted a negotiated agreement with prosecutors and was ordered not to have contact with Kustoff or his staff for the next year. She can have the charges dismissed and removed from her record if she stays away from Kustoff and does not get arrested on any other criminal charges.