Corker was in Columbia on Friday to speak at a joint luncheon of the Rotary and Kiwanis clubs at the Memorial Building downtown. On Thursday in Chattanooga, Corker questioned Trump’s competence and said, “He has not demonstrated that he understands what has made this nation great and what it is today, and he’s got to demonstrate the characteristics of a president who understands that.”

Trump’s critics in the mainstream media and on the left, as well as some establishment Republicans, have maintained that Trump indirectly supported white supremacy by blaming both sides for the violence and saying there were innocent people on both sides.

Asked by The Tennessee Star after Friday’s luncheon what he thought Trump should have said instead, Corker said he didn’t want to get into analyzing it further. 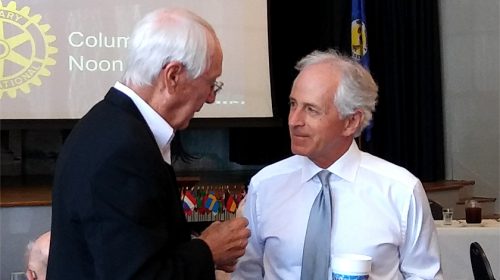 “I’m trying to steer away from that,” Corker said. “What I said yesterday I think speaks for itself. Hopefully this, myself and maybe a few others speaking out, will have an effect. But I just want good things for our country. Republicans and Democrats alike need for our president to be successful.”

During a Q&A session at the luncheon, Corker said that he has had numerous private discussions with Trump and that Trump was probably not surprised by much of what he said publicly Thursday.

Corker declined to comment for The Star on Friday’s announcement that Steve Bannon would be leaving the White House.

The senator also declined to comment on Rep. Steve Cohen (D-TN-9) on Thursday calling for Trump to be impeached because of his Charlottesville remarks. Corker was asked about Cohen’s announcement during the Q&A session.

Throwing up his hand, Corker said, “I don’t think it’s worthy of a response at this moment” and that it was “uninteresting to respond to.”

Corker was also asked about the push to tear down monuments of historical figures that some believe are offensive. He said that we need statues and memorials to teach us about history, but that some might belong in a museum.

During his brief luncheon address, Corker touched on a range of issues, including the national debt, which he said isn’t getting enough attention. The U.S. is $20 trillion in debt and we are set to add a trillion each year for the next ten years, raising the debt by $10 trillion.

“It’s just happening and for some reason, the American people just are not not focused on it,” he said.

Our fiscal instability is a significant reason why China senses we are weak as it rises on the world stage, said Corker, who chairs the Senate Foreign Relations Committee. “They look at us as a nation in decline.”

Corker said there is “tremendous energy” in Congress to get things done after the summer recess, especially after the failure to reach an agreement in the Senate on health care. Corker, who backed a repeal of Obamacare, said that progress is likely to be made on tax reform. President Trump has led efforts to cut the corporate tax rate to help economic growth.

Corker said Congress has been able to work in a bipartisan way at times, but that those accomplishments don’t draw as much media attention as major disagreements. He pointed to the Senate’s recent passage of legislation to sanction Iran, Russia and North Korea by a vote of 98 to 2.

But Corker said working together has become more difficult overall because the two major political parties have become “more consolidated around an ideology.” What happens in Washington reflects what’s happening with the American people more than the American people want to recognize, he said.

“Our nation is divided,” he said.