State Senator Mae Beavers (R-Mt. Juliet) told the Beacon Center of Tennessee on Friday she supports President Trump’s efforts to drain the swamp in Washington, D.C., and intends to do the same thing in Nashville if elected governor.

“We may need an inspector general in every department in Tennessee. I’m talking about draining the swamp, and if there’s anybody worthy of being rehired, we’ll rehire them, but I think we’ve got a lot of problems that need to be solved,” Beavers said.

“I know what I want to do day one, and I have the record to prove I will do those things,” she noted.

“I’m the most conservative [candidate] in the race. I have the track record. I have the voting record to back up everything that I’m saying,” Beavers added.

But then one day her husband, frustrated with local politics, came home from work and announced, “I am so fed up. We’ve got to get involved. One of us has to run for office and I don’t have time.” Beavers was going to school at night, so her husband managed to find enough time to knock on doors and get her elected to the Wilson County Commission. 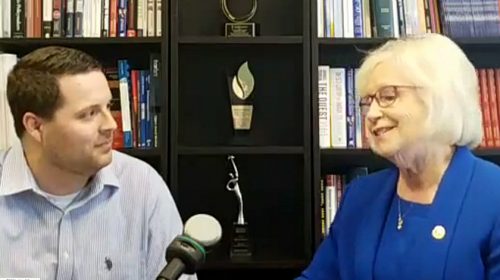 Beavers served as commissioner from 1990-1994, and then as a state representative from 1994-2002 before getting elected to the state Senate, where she has served since 2003. Beavers shared the story of her unlikely foray into politics with the Beacon Center. A Nashville-based nonprofit that promotes the free market, the Beacon Center is conducting Facebook Live interviews with candidates for governor on issues facing the state.

Beavers said she is opposed to corporate welfare, an issue of concern to the Beacon Center. Tax incentives for large corporations hurt small businesses, which struggle to compete, she said. Cutting regulations is key to helping businesses, she added.

Beavers said the state needs more technical schools and should cut back on licensing requirements for entrepreneurs. “We’ve gone too far,” she said. “We’re one of the most burdensome states.”

She also said she believes in school choice and that local school boards should have more say in such matters to prevent unworkable one-size-fits-all policies.

Beavers promoted faith-based programs as a way to address problems with drug addiction and prison overcrowding.

“One of the things that I’ve learned as we’ve traveled the state is that people are having trouble hiring people because they’re on drugs,” she said. “We definitely need to address the opioid problem. That’s keeping us from employing people.”

A faith-based program at her church and others like it help people get off drugs, get an education and become independent, she said.

In the interview, Beavers also spoke of her past efforts on the front lines to stop a state income tax from getting enacted.

Last week, Beavers announced that she will resign her seat in the state legislature to focus on her campaign for governor. Her resignation will be effective Friday.

Here is the video of the Beacon Center interview:

2 Thoughts to “Mae Beavers Tells The Beacon Center She Will Drain the Swamp: ‘We May Need An Inspector General in Every Department in Tennessee’”