NASHVILLE, Tennessee – Cumberland Region Tomorrow (CRT), a charitable entity whose mission is “to support our ten-county region’s values, economic vitality, and quality of life by influencing patterns of growth and development through education and advocacy,” held its ninth annual Power of 10 Regional Summit titled “Sustaining The Boom: World Class Strategies,” at the Music City Center. 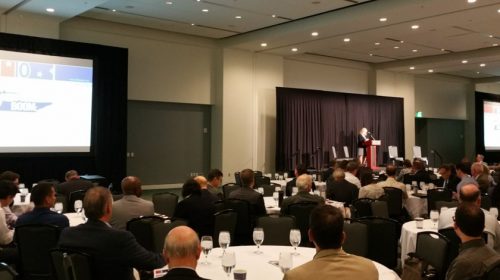 The Summit was attended by more than 200 planners, leaders and elected officials from the 10-county middle Tennessee region that includes Cheatham, Davidson, Dickson, Maury, Montgomery, Robertson, Rutherford, Sumner, Williamson and Wilson counties to discuss regional issues and opportunities in the key areas of improving transportation infrastructure, assuring sustainable development in a period of unprecedented growth and establishing collaborative goals and plans that benefit the region’s rural and urban communities. The “Early Bird Special” registration fee for the event was $90, with most government entities having a “travel” line item to cover such expenses for employees and elected officials. 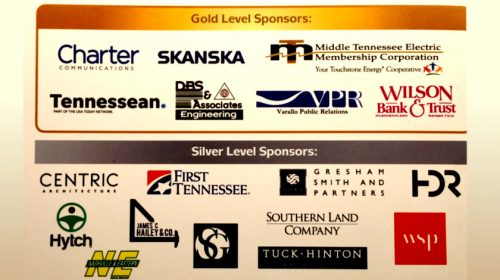 The Summit program’s two keynote speakers were Joe Szabo, the current Executive Director of CMAP, the Chicago regional planning agency and former Obama appointee as the twelfth administrator of the Federal Railroad Administration from 2009 to 2015, and Mitchell Silver, Commissioner of the New York City Department of Parks and Recreation, immediate past president of the American Planning Association and former director of planning for the city of Raleigh, North Carolina.

The top 12 takeaways from the various speakers and sessions: 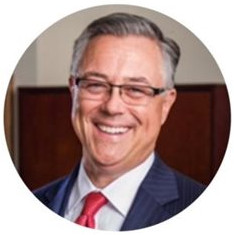 1. Joe of Chicago Metropolitan Agency for Planning (CMAP) stressed having data-driven decision making and establishing success measures, critical, he said, because resources are limited. Priorities for CMAP include long-term planning to improve lives and to help influence national policies that benefit all. Szabo cautioned that tax policy drives retail as a source of revenue, but may not result in the best use of land use and can result in over-building which can then affect traffic in neighboring areas. When questioned by an audience member, Szabo agreed that with extensive transit options in the greater Chicago area, there was still a lot of gridlock. 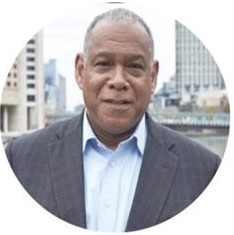 2. Mitchell Silver challenged his organization to rethink the “public realm” to include parks as well as streets/sidewalks, which at 14 percent and 26 percent of the area, respectively, not as separate systems. Parks are revenue generators, and have also driven up asking rents by as much as 100 to 200 percent. Future consumer demand will come from what has been dubbed, Generation X, Y and Z, or those that are currently 53 years of age and under.

3. The Greater Nashville Regional Council (GNRC), an organization of 13 counties and 52 cities with 70 employees and a $12 million annual budget, will be reorganized to “house” the Metropolitan Planning Organization (MPO), like nearly 70 percent of other states. Every dollar from the Federal gas tax used for transit improvement must be appropriated by mayors and the MPO.

4. The Mayor’s Caucus played an important role in the passage of the IMPROVE Act, with Wilson County have a large logistics industry, Williamson County having 69.8 percent of its workforce coming from outside the county, Rutherford County having the largest daily flow of commuters at nearly 37,000, Sumner County having over 20,000 commuters both in and out, and Montgomery County having the 5th largest city in Tennessee and being interrelated with Davidson County through Austin Peay State University and Fort Campbell.

5. Williamson County Mayor Rogers Anderson said that transit is very important to the middle Tennessee area and is proud of the fact that the mayors started eight years ago to drive for the local taxing options in what became the IMPROVE Act. Anderson reported that Metro Davidson County will have a referendum in the spring, while Williamson County is “not ready” and will be “2 to 3 or maybe 4 years out.” Anderson added that he doesn’t believe it’s possible to pass it [referendum on local taxation for a transit plan} without the people knowing what they’re getting. In actuality, it is a requirement of Public Chapter No. 181, which enacts the IMPROVE Act, that a comprehensive transit plan be developed, with its plan of financing reviewed by an independent certified public accounting firm after obtaining approval from the Tennessee Comptroller of the Treasury as to firm selection and their procedures, and then be put to an election by the people.

7. TDOT Deputy Commissioner of Environment and Planning, Toks Omishakin, said the Department will be looking at “innovative ideas that traditionally TDOT doesn’t take on” and that a big announcement regarding the utilization of technology will be forthcoming.

8. One downside of regionalization, according to Omishakin, is that “everything kind of mashes together and growth spreads further out where it is not as well planned and creates more congestion and growth patterns we don’t really need to have here.”

9. Forward Sumner President and CEO, Jimmy Johnston, in speaking on improvements to the Northeast Corridor, specifically on Hwy. 386 with TDOT doing something they haven’t done before with looking at multi-modal transportation during a widening project, thanked Governor Haslam, Sen. Ferrell Haile (R-Gallatin) and the mayors for the IMPROVE Act.

10. The “Livability” lightning round panel touched on a variety of topics related to the changes and challenges that come along with communities that are now focused on having “experiences” and a millennial population that has “flexpectations” as opposed to the traditional “expectations” of employees and employers, including the need for varied employment options including jobs for qualified white collar and “creative class” employees in more rural areas; availability of internet; keeping Fort Campbell soldiers, who are transitioning out at a rate of 400 per month, in the area by having job opportunities; preservation by not allowing development requiring a road and schools in the middle of farm land; the transition from large lot “McMansions” to nice homes on small lots with amenities that include open spaces to compensate for parks and green spaces that “can’t keep up,” as well as Transit Oriented Development (TOD).

11. CRT President/CEO Carol Hudler said the organization “believes it’s time for the region to set key goals” and to “create robust set of metrics” regarding “economic development, public safety, transportation, farms and forests, greenbelts and open space, water quality and quantity, food security” among others. As such, Hudler proposed forming a small working group to study goals for the 10 counties with the objective of reporting back in 120 days. During the Summit, there was no feedback on the proposal or formation of the study group. 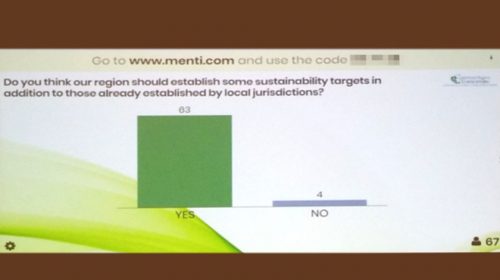 12. Attendees were encouraged to take part in a four-question live survey by logging onto a website, menti.com and entering a special code. As the survey was taking place, the results were projected on large screens. The vote totals indicated below were captured while attendees were still allowed to participate in the survey, and while final results were not shown to the audience, the vote counts listed below are indicative of the response trends.

– Which of these areas do you think are the most important for CRT and its partners to set regional goals and metrics around to measure progress? You may choose up to 3 options.

– What is the biggest thing we should work together on as a region?

– How important do you think having these goals as a report card is for the region’s long-term sustainability?

– Do you think our region should establish some sustainability targets in addition to those already established by local jurisdictions?

CRT did not respond to a request for additional information.