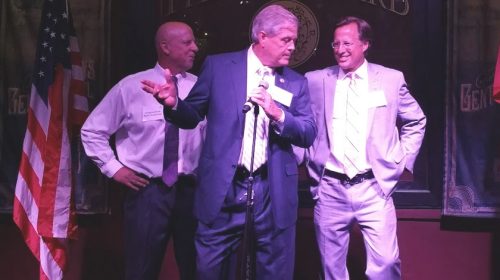 The House Freedom Fund is a Political Action Committee (PAC), with Jordan serving as Chairman, that “helps elect rock-solid conservative candidates to the U.S. House of Representatives.”

All five Congressman made comments in front of the group of attendees and then mingled amongst them, making their rounds to speak with everyone on an individual basis over the course of a couple of hours. All expressed optimism for the future as well as support for each other, fellow Freedom Caucus members and President Trump.

The comments addressed a variety of topics including current legislative issues of Obamacare repeal and tax reform as well as some of their individual experiences since being in Washington, D.C.

Congressman DesJarlais, who holds the highest conservative scorecard ratings of the entire Tennessee delegation, said of the event, “I’m glad my colleagues could experience some Tennessee hospitality, while we plan for the future.” He continued,

The event was an opportunity for conservatives to come together and recommit ourselves to an agenda we know will benefit all Americans, who expect big changes to the way Washington works. I understand their frustration with the slow pace, and resistance from the usual quarters, far-left Democrats and unfortunately some Republicans, but the positive atmosphere and new Freedom Caucus members should be cause for optimism. Just like our constituents, we feel the pressure to take advantage of this historic opportunity and are determined to enact health care and tax reform as well as other solutions to the problems facing our country.

At the forefront of the Freedom Caucus, Congressman Jordan put it straightforwardly, “We make this job too complicated. It’s simple: Do what you said you’d do when you ran for the office in the first place. That’s what the Freedom Caucus is committed to, and I hope it’s what the American people understand that we’re fighting for.” 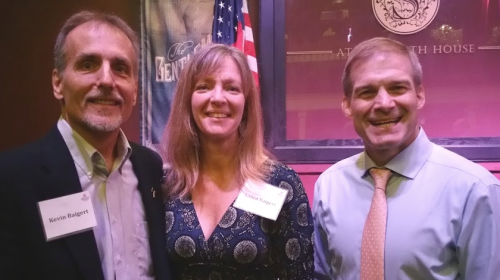 Creating one of the biggest upsets in congressional history with his primary win over House Majority Leader Eric Cantor, Congressman Brat said of the Nashville gathering, “The Freedom Caucus serves as a principled conservative voice for our constituents in a town where special interests often have the biggest microphone. We are committed to keeping the promises we made when we were elected. It was a privilege to hear from those who share that same commitment to free-market policies that will move our country forward and generate economic growth.”

Candidate for the 6th Congressional District to replace Representative Diane Black who is seeking the Republican nomination for Governor, State Representative Judd Matheny (R-Tullahoma) took to the stage for a few moments, confidently declaring that he will be going to Washington to help the Freedom Caucus.

While a complete list of House Freedom Caucus members is not published, Representative Marsha Blackburn (TN-4) was the only other member of the Tennessee delegation who joined the group for a brief period.