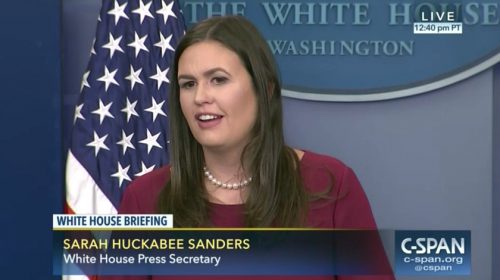 The news came after Ms. Sanders took the podium at the conclusion of White House Homeland Security Advisor Tom Bossert’s question-and-answer period updating reporters on the federal government’s response to the devastating storm.

A media correspondent noted the outpouring of support by Americans in response to the destruction of so many homes and businesses in and around the Houston area from Hurricane Harvey, and asked, “Can you speak to what the President and his family have done regarding donations for Harvey relief?” and then hastily added, “Personally?”

Sanders answered, “I can.”

“I spoke with [President Trump] directly earlier and he would like to join in the efforts that a lot of people across the country do, pledging a million dollars of personal money.”

She added, “He has actually asked that I check with the folks in this room, since you are very good at research and have been doing a lot of reporting into groups and organizations that are most effective in helping and providing aid. He would love suggestions and I would be happy to take those if any of you have them.

“He will pledge proudly $1 million of his own personal money to help the people of Texas and Louisiana,” she concluded.

President Trump is planning a second trip to the flooded region this weekend.