The Tennessee Immigrant and Refugee Rights Coalition (TIRRC) is calling President Trump’s decision to phase out DACA “cruel and reckless,” but supporters are praising the move.

The Trump Administration announced Tuesday morning that DACA recipients will lose their protected status starting in March unless Congress acts.

“Attorney General Jeff Sessions sent a letter to the Department of Homeland Security explaining that DACA was not statutorily authorized and was therefore an unconstitutional exercise of discretion by the executive branch,” said a White House news release. The decision is being cheered by Americans who want tougher immigration enforcement, but activist groups like TIRRC are outraged.

DACA, or Deferred Action for Childhood Arrivals, is a program that was started by former President Obama through an executive order. It offers young people who were brought to the U.S. illegally as children a chance to obtain temporary permission to live and work in the U.S.

“Over the past five years, the DACA program has been a lifeline for more than 8,300 Tennesseans, providing a sense of security and a chance to dream and invest in their future here,” said TIRRC in an online letter to supporters. “Caving to the demands of extremist attorneys general and white supremacists in his administration, the president just made clear there is no limit to his anti-immigrant agenda. The president’s decision to terminate the DACA program is cruel and reckless: he’s devastated 800,000 families and the country gained nothing.” 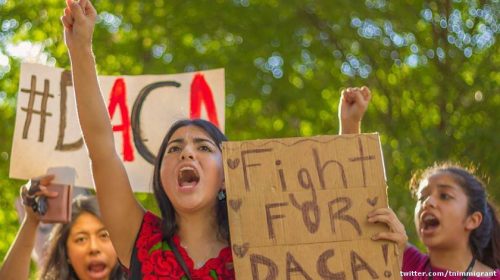 TIRRC will hold a march Tuesday afternoon in support of DACA recipients, known as Dreamers. The march will start at 4 p.m. at Nashville’s Centennial Park and head to the offices of Sens. Lamar Alexander (R-TN) and Bob Corker (R-TN) on West End Avenue.

Republican Tennessee Attorney General Herbert Slatery announced last week that he was no longer supporting an effort to pressure Trump to end DACA. Slatery in June had joined a coalition of conservative state attorneys general who said they would challenge DACA in court if Trump did not end the program.

“As the Texas-led coalition explained in our June letter, the Obama-era program went far beyond the executive branch’s legitimate authority,” Paxton said. “Had former President Obama’s unilateral order on DACA been left intact, it would have set a dangerous precedent by giving the executive branch sweeping authority to bypass Congress and change immigration laws.”

Paxton was initially joined in his efforts by nine other state attorneys general, including Slatery, and one governor.