GALLATIN, Tennessee – With dozens of citizens in attendance opposing the Westbrook development, the Sumner County Commission, by a margin of 19 to 4, voted to approve a zoning change for property on Long Hollow Pike from R1A to Planned Unit Development (PUD)-medium density to accommodate developer TN Homesites. 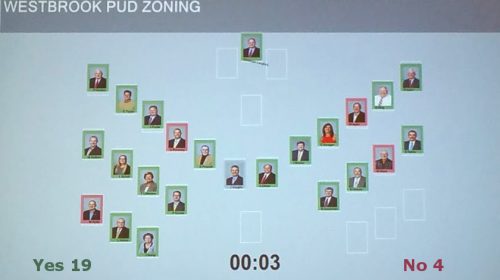 The rezoning to PUD-medium density will permit the Westbrook development site-specific plan to include 99 homes on the 45.34 acres that would have otherwise been limited to 49 homes under the R1A zoning, which requires 0.92 acres as a minimum lot size.

Meetings on the topic have been ongoing for months, and there has been consistent, ongoing and significant opposition from concerned citizens in the area who have organized as Protect Historic Shackle Island with a Facebook page that is currently up to 1,025 members.

Long Hollow Pike is largely rural and with its farms, open spaces and large lots, is considered a scenic route by those who travel it. Up to this point, the County Commission has yet to approve even a low-density PUD in the area and rejected one known as Buchanan Estates in January 2016. Subsequently, the developer, Orco Investments, brought a lawsuit against the County which they lost by way of a dismissal by the court.

The court cited that “the question becomes whether any possible reason can be conceived to justify the action of the Sumner County Board of Commissioners in denying Orco’s rezoning request.” The court found that it [County Commission] can for “significant concerns over multiple issues” and provided a partial list of six. Of those six issues, at least three also apply to the Westbrook development: consistency with the 2035 Comprehensive Plan, concerns over lot size and density, and concerns over emergency and fire coverage as well as traffic, in an ever increasingly congested area.

One of the two County Commissioners for the subject district, Bill Taylor, who also sits on the Planning Commission, said of the previously rejected 59-acre Buchanan Estates, “There’s no option here of 111 homes,” continuing, “You have an option of 58 homes, maybe.” Commissioner Bill Taylor voted against Buchanan Estates that would have incorporated 1.88 homes per acre, versus the now-approved Westbrook development at 2.18 homes per acre, which he voted in favor of at both the Planning Commission and County Commission meetings. 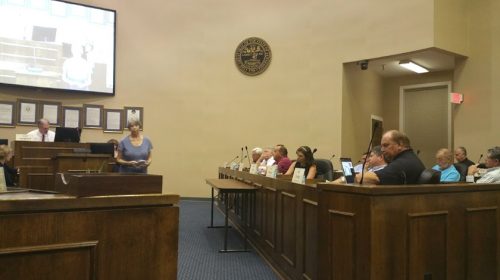 In addition to the rural feel of the Long Hollow Pike corridor, the area in debate is known as Historic Shackle Island. Nearly forty years ago, in January 1978, six discontinuous properties were entered on the United States Department of the Interior National Park Service National Register of Historic Places.

One of the six historic properties is the Beech Cumberland Presbyterian Church, which is immediately adjacent to the Westbrook development medium-density PUD, as is its adjoining cemetery which contains the graves of Revolutionary War veterans John McMurtry and Francis Ketring as well as several graves of Confederate Army veterans.

While Sumner County elected officials, like many in middle Tennessee, repeatedly declare that growth is coming and there’s nothing that can stop it, they make zoning changes for developers who buy land with one-acre or greater lot requirements with the expectation that they can have it changed, which serves to increase the rate of growth. The growth then strains, and lacks a plan to deal with infrastructure needs such as roads, schools and emergency services.

The Sumner County Commission established a Long Hollow Corridor Ad Hoc Committee, and in December 2015, authorized a $160,000 expenditure for the development of a land-use plan, which has yet to be approved.

Since the County Commission’s denial of the Buchanan Estates re-zoning request in January 2016 and subsequent lawsuit, Sumner County’s process for re-zoning has remained unchanged by the Planning Department, which reports to the County Executive, Anthony Holt, likely opening itself up to further difficult and controversial decisions.