If one were tasked with devising a test to determine whether a person was a card-carrying member of the Washington Republican establishment all he or she would need to do is mention the words “Steve Bannon” to the subject and jot down the individual’s reactions accordingly.

For although Bannon has been officially gone from the White House for a month the elites can’t stop taking shots at President Donald Trump’s former senior advisor and now head man at the unapologetically conservative Breitbart News. Bannon remains a central figure in President Trump’s orbit even though he no longer has office space in the West Wing.

Judging by the degree of animosity Bannon engenders from the ruling class, he might as well be permanently planted on top of the president’s desk. It’s starting to get ugly.

David French wrote at National Review the other day, “On 60 Minutes [Sunday] night, the man [Steve Bannon] credited with shaping Trump’s ‘America First’ brand of politics clearly and unequivocally declared his disdain for George W. Bush and Bush’s entire national-security team, calling them ‘idiots’ and saying that he holds them ‘in contempt, total and complete contempt.’…

“There’s no substitute for forward-deployed American force, nor for taking and holding ground against our worst enemies. Obama had to learn this lesson, while Trump caught on more quickly. Now Bannon is exactly where he belongs: out of the administration and out of the national-security establishment. Let him marinate in his foolish contempt. America since 9/11 is far safer and more secure than we feared it would be. That is no accident, and I for one am grateful for the ‘idiots’ who made it so.” 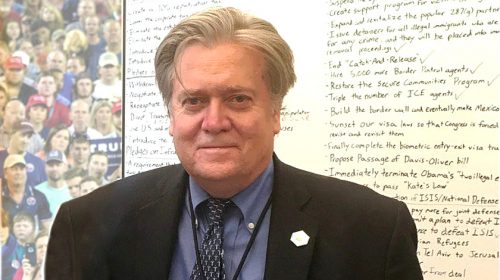 No, David, Steve Bannon was right about the Bush national security people — and you and the “idiots” were indeed wrong.

Or should I say, mostly wrong.

The neoconservative mission to spread western values and constitutional democracy to regions of the world dominated by Sharia supremacy ideology over the past fourteen years has repeatedly proven to be utterly fruitless. I don’t claim to be an expert but in looking at the hottest spots in the world today, there has been precious little stability gained by Bush’s sending of large numbers of American troops to try and root out jihadists on their own soil in a vain attempt to bring “civilization” to the local populations.

Western enlightenment is something these people neither want nor would ever accept; it’s impossible no matter how much scholars in Washington think tanks and board rooms wish it were otherwise.

For as long as the Islamist supremacist ideology exists there will be terrorists lining up to shoot at Americans, persecute homosexuals, degrade women, torture infidels, lop off heads and carry on the fight until they die – or prevail. The ideology will always exist because it is ingrained in Islam itself.

Terrorism expert Andrew C. McCarthy articulated it well: “Not nearly all Muslims are Islamists, and only a small percentage of Islamists are jihadists. But jihadists, like all Islamists, quite legitimately call themselves Muslims. Fourteen centuries of scholarship supports them.”

Because of this fact most reasonable people agree post 9/11 that some minimal U.S. military presence in these regions is necessary to conduct counter-terrorism raids when, based on intelligence, action is called for to take out cells or prevent future attacks. But that’s it. And what Bannon said (about Bush’s foreign policy team) was 100 percent on point; Bannon’s is a line of thinking most Americans seems to share and helped his boss get elected last November.

It’s frankly surprising – and disturbing at the same time — that the Bush/neoconservative worldview still enjoys such a strong presence in the Republican Party because it’s demonstrated time and again to be a losing political argument. Jeb Bush, Marco Rubio, Chris Christie and the rest of the party establishment candidates all voiced some form of “we need boots on the ground everywhere” rationales during last year’s primaries and the voters rejected them.

Clearly it wasn’t entirely due to an innate love for Donald Trump and his somewhat jumbled and unrefined “America First” foreign policy agenda; it was because Trump represented a clear departure from the type of thinking that’s dragged America into endless wars that costed trillions of dollars and thousands of American lives…for what? Still waiting for a response….

While it’s certainly true that major terrorist attacks ceased during Bush’s post-9/11 years, a good argument could be advanced that domestic peace was secured through heightened awareness that the evil ones were out there lurking somewhere together with enhanced surveillance techniques to discover where they were hiding.

Such a cooperative strategy was halted under Obama and there was Boston, Ft. Hood, San Bernardino, etc. as a result.

Yes, Bush deserves some recognition for the focus on finding terrorists but the neoconservative methods alone didn’t achieve the calm. To give Bush all the credit because something didn’t happen is absurd. The radical Islamist ideology is still out there; it may go dormant (or appear to do so) at times but it hasn’t been eradicated and likely never will be (at least with U.S. leaders who still insist Islam is a “religion of peace”).

If French and his kind had their way we’d be re-instituting the draft and marching off our high school graduates to be stationed in every doorway in the Middle East in order to keep peace. It wouldn’t succeed either.

What will work is what Trump, through guidance from men like Bannon, began to implement in the earliest days of his presidency, namely “extreme” vetting of refugees and the bringing of a new approach towards immigration and who receives permission to come to the United States.

And if Americans really desired what French and the Bush “idiots” were peddling then someone other than Trump would’ve won the party presidential nomination – or at least gotten close.

“But the media, always searching for a decoder ring for Trump, will keep looking to those who do not represent Trump and construct Trumpism out of whole cloth. And we in the so-called intelligentsia will keep believing that perhaps there’s more than meets the eye to Trumpism, when in fact, Trump is the beginning and the end.”

It should be noted Shapiro used to work for Bannon at Breitbart but left because of the publication’s open cheerleading for Trump in the Republican primaries.

The gist of Shapiro’s argument is Bannon was no more than a barnacle on a whale to Trump’s movement because Trump himself is the only one who truly steers the ship. It’s just the latest iteration of the “Trump is a loose cannon, a man who plays by his own rules” establishment explanation for how Trump won the presidency.

These people still insist Trump doesn’t have any true friends and keeps his own counsel. It’s been reported, for example, that a long line of advisers have tried to stop Trump from tweeting, but he won’t because he can’t be controlled.

But why should a president be saddled in such a manner? Would Obama always do what people told him to do? Bill Clinton? George W. Bush?

The latter two, probably yes – and look where it got them: two terms for each but without much of a political endowment. Can anyone define what Clinton or Bush really stood for?

Trump is similarly hard to pin down but there’s little question he’ll leave the GOP different than before he arrived on the scene.

Jonathan S. Tobin wrote at National Review, “Even in failure, Trump has sown seeds of dissension that will ensure that what follows is very different from what preceded him. No matter how dysfunctional his presidency becomes, Trump and Bannon will blame all defeats on the wicked establishment and most of his base will believe them.

“The uneasy coalition of fiscal conservatives, foreign-policy hawks, libertarians, and social conservatives that elected Ronald Reagan and sustained Republicans in the decades since then may have been fatally fractured. Until the party has a leader around whom it can unite with a vision of Reaganite conservatism — something that probably can’t happen until 2024 — conservatives are fighting an uphill battle against an incumbent president who has already tilted the playing field against them.”

There goes the “doomsday” talk again — you know, the “Trump is ruining the GOP” and “Trump is tarnishing conservatism with his brand” blather. It gets old. Do these people really think Republicans are sitting astride a powder keg with a lit fuse that will eventually explode and because of Trump everyone will then start voting for Democrats?

Because of Trump and Steve Bannon will Americans rush to embrace Nancy Pelosi and Elizabeth Warren?

Hardly. Donald Trump’s political legacy is yet to be fully written. He’s a one-of-a-kind force in American politics. If Republican leaders were smart they’d follow his lead or the voters just might recognize the GOP for what it’s become: an establishment party that doesn’t stand for anything.

Reprinted with permission from ConservativeHQ.com.