Everyone who follows country music has heard of the beloved band, Little Big Town.  After winning over 20 music industry awards, they are not only famous, but incredibly talented as Karen Fairchild, Jimi Westbrook, Kimberly Schlapman and Phillip Sweet’s harmonies are often compared to those of “Fleetwood Mac.”

Not only was Little Big Town chosen as the first year-long “Artist in Residence” in the 125 years of history of the Ryman Auditorium, on September 14 they also received their “Star” at the nearby Music City Walk of Fame Park.

After two mostly unsuccessful record deals in the early 2000’s, Little Big Town signed with Equity Music Group in 2005 and recorded their smash hit “Boondocks” along with three other top 20 country hits. By the end of 2006, the album The Road to Here had been certified Platinum in the United States.  Also in 2006, Keith Urban provided Little Big Town with added exposure as they were invited to be a part of his Still Alive in ’06 tour. 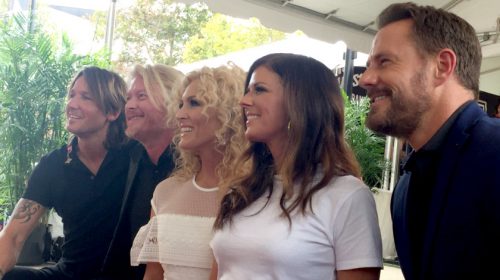 In addition to their Road to Here album, Little Big Town has produced six more awarded winning records garnering 24 singles on Hot Country Songs and County Airplay of which three went to number one including “Pontoon,” “Girl Crush,” and “Better Man” (written by Taylor Swift).

As Keith Urban introduced the vocal group at their Walk of Fame unveiling he stated, “Little Big Town is the closest thing to a family band who are not related that you will ever meet. Their only connection is the spirit that you feel when you hear them sing.”

In addition to Little Big Town receiving a star on the Walk of Fame, two famous Ryman founders also were honored posthumously. As told by Old Crow Medicine Show’s Ketch Secor, Captain Tom Ryman was moved during a revival service in 1885 to build a church (the Union Gospel Tabernacle) on the Cumberland River. This facility was eventually renamed to be the Ryman Auditorium.

Although the Ryman was originally built to be a place of worship, it was often leased to promoters for non-religious events during the week to help pay off its debt. Lula C. Naff, a widow and mother, began to book and promote speaking engagements, concerts, boxing matches, and other attractions at the Ryman in her free time. Her management expertise was the foundation for what the venue has become today. For her vision, Lula C. Naff was also awarded a star on the Music City Walk of Fame.

Says Schlapman, “We started driving ourselves around in a minivan 18 years ago and we told our agency, CAA, if you will get us gas money, we will go wherever they will listen to us.”  There is no way their wildest dreams could they imagine performing multiple sold-out shows in their unprecedented year-long artist residency at Nashville’s “Mother Church,” the Ryman Auditorium.

On September 16, Little Big Town performed their 9th of 10 sold-out shows at the Ryman.  Even though they are technically called “country” by their label with their staple songs such “Boondocks,” “Good as Gone,” and “Little White Church,” they covered a Fleetwood Mac song, “Chains” which may have been better than the original.  However, if you are privileged enough to hear Little Big Town’s live rendition of Alisha Keys “Fallin,'” it will send chills up and down your spine. 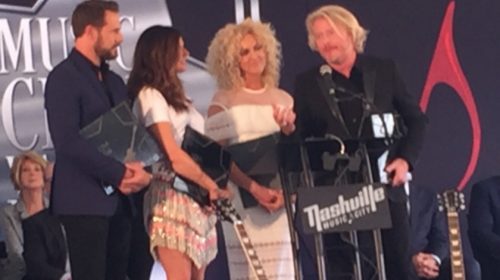 One of the foremost reasons that Nashville has become known as “Music City” is because of the shows at Ryman, where the Grand Ole’ Opry first originated, has attracted performers and visitors from every background and musical field.  Little Big Town humbly acknowledges the privilege they have been granted as being Ryman’s first year-long residence.  Little Big Town’s Jimi Westbrook stated, “When you come from a little town, you hold on to these treasures that you have… it’s rare that you find another place that feels like home, but Nashville does.  When we play these shows at the Ryman over and over again, we feel embraced by this town.”

With Little Big Town arguably being the best vocal group in recent memory, their residency is at the Ryman is well-deserved.  Little Big Town’s final “Artist in Residency” show will be November 27th in Nashville, Tennessee.

– – –
Bethany Bowman is an entertainment writer for the Tennessee Star.