BRENTWOOD, Tennessee — State Rep. Judd Matheny (R-Tullahoma) said Tuesday he wouldn’t be surprised if U.S. Rep. Diane Black (R-TN-6) decided to resign her seat in Congress to focus on her campaign for governor.

“If not, the governor’s race is going to leave her behind,” said Matheny, speaking at a fundraiser at the home of political supporters in Brentwood.

Matheny said the race for governor is shaping up to be competitive, with five leading candidates vying for the Republican nomination.

If Black were to resign her 6th congressional district seat early, there would be a special election to replace her. Matheny is already campaigning hard to win her seat in 2018. 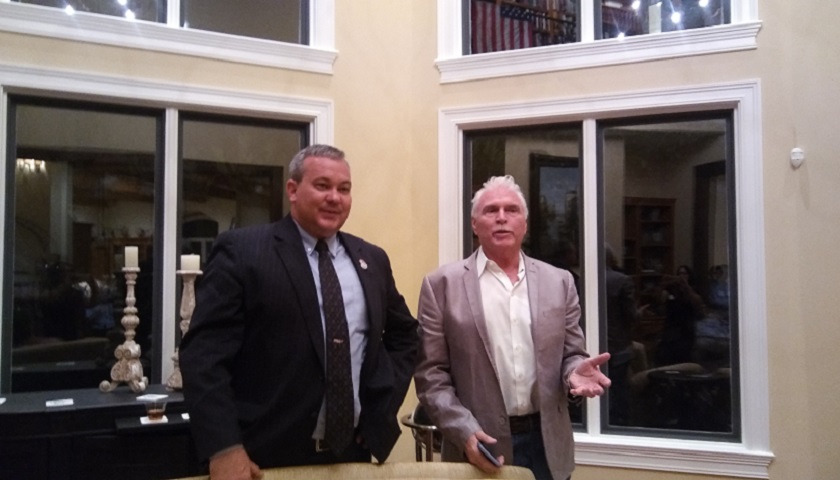 Matheny spoke Tuesday evening at the home of Lee and Elizabeth Douglas. Lee Douglas is a dentist and conservative activist. He told his guests he doesn’t know Matheny well personally, but has followed his political career and is impressed with his conservative credentials. Douglas said Matheny could be the next Ted Cruz or Mike Lee. Matheny announced last month that he has hired a top Cruz strategist to work on his campaign.

Douglas said Matheny represents him even though he doesn’t live in Matheny’s state House district or the 6th congressional district. He said Matheny is doing a “much better” job than state Rep. Charles Sargent (R-Franklin), who will face a challenge for the Republican nomination next year from conservative activist Rebecca Burke.

Matheny said he is ready to go to Washington, D.C., and serve in Congress. 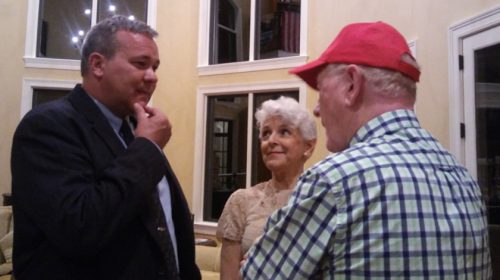 Matheny said he would support gun rights and a tough military but less nation building. He also said he is concerned about the spread of radical Islam. “This is a serious, serious problem,” he said.

In addition, Matheny said he’s ready to tackle problems related to an aging population and aging infrastructure in the U.S.

As a teen, Matheny spent a year living in West Africa, where his father taught agricultural pest control for the U.S. Agency for International Development (USAID). The time spent living in rustic conditions with spotty electricity and one telephone for the whole town was life-altering, Matheny said Tuesday.

“I was radically changed,” he said, describing how he realized that many Americans take what they have in the U.S. for granted.

Matheny became determined to serve his country and joined the Tennessee Army National Guard and then local and state law enforcement. Later entering politics, he threw himself into learning about the U.S. Constitution. He said he discovered how states are meant to be “individual laboratories of good government” and that the federal government is not to impose things like socialized medicine.

Matheny has also worked as an entertainment manager and owner of a private security company.

Also running to succeed Black in Congress is John Rose, a small business owner and farmer who served as state agriculture commissioner from 2002 to 2003.