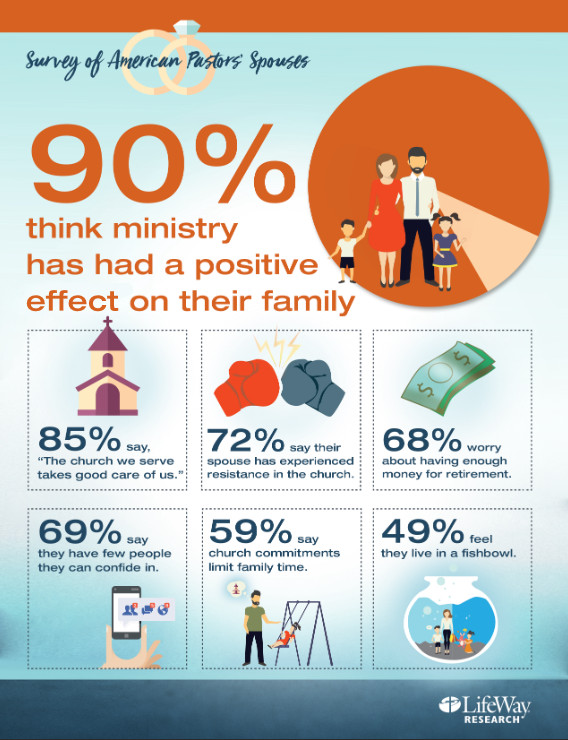 Pastors’ spouses say their roles are meaningful and fulfilling, but they also experience pressure and stress, younger spouses especially, according to the results of a new LifeWay Research study.

The survey of 720 spouses focused primarily on spouses of senior or solo pastors within a variety of Protestant denominations. The vast majority of spouses surveyed are women. Just over half have children at home, and just over half have been married to a pastor for at least 20 years. Most have responsibilities at their church and some – 19 percent – are on the staff. More than half – 55 percent – work outside the church, a quarter of them for another church, ministry or nonprofit.

“Despite their challenges, most pastors’ spouses say they are happy,” said Scott McConnell, executive director of LifeWay Resarch, in an article in Facts & Trends, a LifeWay publication.

But pastors’ spouses also report experiencing feelings of isolation and frustration with not knowing who to confide in and trust. They say their families are continually evaluated and that their spouses have met resistance at church. Money is also a big worry.

Those in younger age groups have more challenges in building relationships than those in older age groups, according to the survey’s quantitative report. They are experiencing more conflicts at church and are less willing to confide in others because of past betrayal and fear of gossip.

While the results of the survey are unlikely to surprise regular churchgoers familiar with church dynamics, they serve as a helpful reminder of the challenges faced by pastors’ spouses.

“They feel like their family needs to be perfect,” Kathy Litton, a national consultant for pastors’ spouses at the Southern Baptist Convention’s North American Mission Board, told Facts & Trends.

Litton has been married to a pastor for nearly 40 years. She said she felt a lot of pressure when she was younger but now advises others to see pastors and their families as people “who need Jesus and the gospel like anyone else.”