Members of the 917 Society traveled around Tennessee last week giving away free pocket Constitutions to eighth-graders to mark Constitution Week.

The Nashville area nonprofit has reached 10,000 students so far with the launch of its Constitution Project, which is for public, private and homeschooled students.

In Tennessee, eighth-grade is an important year for civics education, including an emphasis on the Constitution. 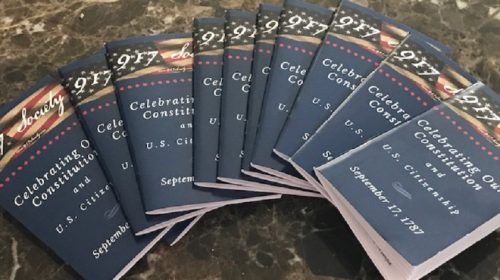 The group is continuing to fulfill requests for copies of the pocket Constitutions. The group also makes available other resources for teachers, including a short documentary on the Constitution narrated by Kentucky journalist Nick Clooney, father of actor George Clooney and brother of the late singer Rosemary Clooney. Other films and resources will be developed for future years.

Joni Bryan, executive director of the 917 Society, told The Tennessee Star that one challenge her group faces is that recognition of Constitution Week in Tennessee schools is uneven from school to school.

“The biggest problem is there is no consistent program or promotion at the state level,” Bryan said.

School districts generally leave decisions on recognizing Constitution Week up to individual schools and teachers. Bryan said the teachers who gravitated toward the 917 Society’s resources for Constitution Week were grateful and enthusiastic, and she plans to eventually reach more educators. The group intends to cover the rest of the state by Dec. 15, Bill of Rights Day.

“Since we are a fairly new nonprofit, many schools are just now learning about us,” Bryan said.

So far, participation in school districts reached, including Metro Nashville Public Schools, has been about equal, she said.

Constitution Week was established by Congress in 1956 to begin each year on Sept. 17 and run through Sept. 23. Delegates to the Constitutional Convention signed the document on Sept. 17, 1787.

Sept. 17 was known as Citizenship Day, but in 2004, Congress changed the name to Constitution Day and Citizenship Day. Schools and federal government agencies were required to provide related educational programs.

Bill of Rights Day recognizes the ratification of the first ten amendments on Dec. 15, 1791.

State lawmakers this past spring passed a bill to give Constitution Week a boost by designating it Celebrate Freedom Week and promising to provide teachers with additional resources. The legislation goes into effect next year. 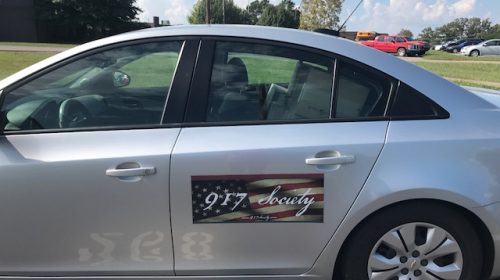 “The purpose is to educate students in grade K-12 about the sacrifices made for freedom in the founding of this country and the values upon which it was founded,” wrote state Sen. Joey Hensley (R-Hohenwald) in a column in the Wayne County News. “This initiative emphasizes the teaching of the country’s origins with an emphasis on the founding documents, including the Declaration of Independence.”

Hensley sponsored the bill in the state Senate. It was sponsored in the House by state Rep. David Byrd (R-Waynesboro).

“With the advent of technology, our young people are exposed to global issues daily,” the 917 Society said in a press release last week. “While seeing themselves a global citizens is not a bad thing, we are losing our identity as Americans first and foremost. As we have been working on this project for the past three years, we realized there is a disconnect in our country that must be remedied, a missing link which we feel is patriotism being taught and encouraged.”

Another challenge facing the 917 Society is that while many believe more needs to be done to promote the Constitution, not enough people want to get involved to work for change and financially back efforts like those of the 917 Society, Bryan said.