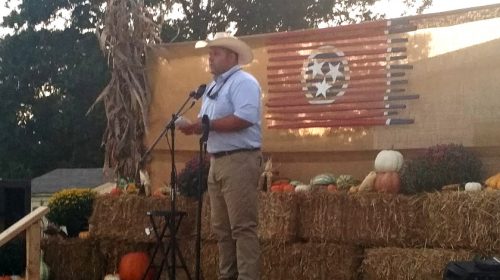 According to the Facebook post, the straw poll was done “to determine the following question: ‘If the 2018 Election for Tennessee Governor were held today, I would vote for.’” The post went on to say,

And the straw poll results are as follows:

During the event, Holt announced that he extended an invitation to the event to all the candidates, but just three – Mae Beavers, Beth Harwell and Bill Lee – actually attended. In his comments, Holt said of the gubernatorial candidates, “Only three took the time this evening to be with us. I hope you take that into consideration when you cast your vote.” 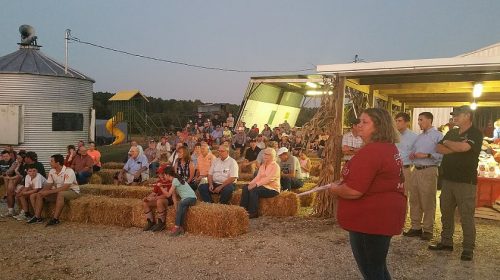 More than 100 attendees traveled from around the state to the rural Holt Family Farm, several of whom displayed Mae Beavers stickers on their shirts.  Bill Lee’s campaign bus was parked on the road in front of the Holt home, and Beth Harwell traveled to the event with her security detail.

After being introduced by Holt in alphabetical order, all three candidates made abbreviated stump speeches.

In addition to the gubernatorial candidates, Rep. Tilman Goins, who had about a six-hour drive from Morristown as well as Congressman David Kustoff (TN-08) and Senator Mark Green (R-Clarksville) were in attendance, the latter two speaking briefly to the crowd.

Kustoff commented that he is “proud of the action President Trump made” and “proud to serve under Donald Trump,” adding that he is the “right man to be commander in chief.” About the gubernatorial race, Kustoff said that there is no candidate from west Tennessee. Speculating “it will be won in west Tennessee,” Kustoff said to the gubernatorial candidates, “I encourage you to visit a lot in the next 10 to 11 months.”

Green talked briefly about his experience as Secretary of the Army nominee as well as a story from his time in Iraq.

Holt, after expressing appreciation for supporting him by “bringing your hard earned money,” he concluded the comments by sharing his concern that while Donald Trump was elected President, “The left never rests,” and cautioned, “Never think we can’t lose those freedoms we have.”