Outspoken conservative and Texas’ official Tweeter Laureate Justice Don Willett was nominated to the join the federal bench as a Circuit Judge on the U.S. Court of Appeals for the Fifth Circuit by the Trump Administration, the White House announced Thursday.

Upon hearing the nomination was made public, Judge Willett took to Twitter to let his 101,000 followers know:

I am honored & humbled by @POTUS's nomination to the 5th Circuit.

“For over a decade on the Texas Supreme Court, Don Willett has proven himself to be a jurist of the highest order,” Ted Cruz said in a statement lauding the Administration’s decision. “His service on the court was simply one more step in a career of public service, from the Texas Governor Office, to the White House, to the Department of Justice, to the Texas Attorney General’s office. Every step along the way, Justice Willett has stood out as man of intellect and principle, and I am excited to see what he will accomplish on the Fifth Circuit.”

Justice Don Willett was appointed to the Texas Supreme Court by Governor Perry in 2005, and was subsequently elected to that position by the people of Texas in 2006 and 2012. 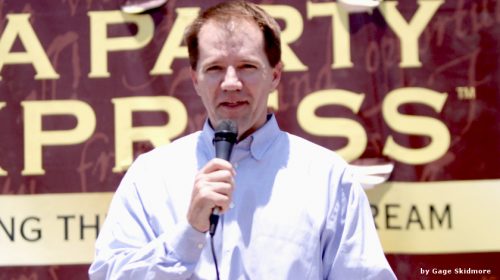 But for the rest of America outside of Texas and the Bush White House, our introduction to Justice Willett’s brand on unapologetic – and often laugh-out-loud – conservatism came when he burst on to the Twitter scene at the very beginning of the Tea Party movement in 2009.

In the run-up to President Trump’s nomination of Neal Gorsuch to the United States Supreme Court, Willett’s name was rumored to be on the shortlist. The Texas Observer wrote in its deep-dive:

If you’d ever heard of Texas Supreme Court Justice Don R. Willett before Donald Trump put him on his Supreme Court short list, it was probably because you followed him on Twitter. Firing off 140-character missives on such subjects as the ups and downs of the Dallas Cowboys, the glory of the Greatest Generation, the splendor of Austin barbecue and, above all, the exploits of his three young children, “the wee Willetts,” the 50-year-old judge has attracted more than 60,000 followers, earned frequent mentions in the legal blogosphere and been named — by the Texas House of Representatives — the state’s “Tweeter Laureate.”

“I am real-time fact-checking my 7YO daughter’s bedtime,” @JusticeWillett wrote the night of the first presidential debate, in September. “I’m thirsty — FALSE; I’m hot — FALSE; I’m cold — FALSE; I need a band-aid — FALSE.”

“Wife says if this gets 5,727 [retweets]—1 for each day of our marriage—I can wear this (or Batman!) when we renew our vows!” the 11-year veteran of the state’s highest court wrote next to a picture of him dressed in a tricorn hat and Colonial garb.

Justice Don Willett lives in the Austin area with his wife and three children.