When The Tennessee Star asked State Rep. Barry “Boss” Doss (R-Leoma) why his company’s Doss Brothers, Inc. construction equipment was seen at a $2.2 million road construction project in Ardmore, the chairman of the House Transportation Committee who pushed Gov. Haslam’s gas tax increase through the Tennessee House of Representatives said “The turn lane being constructed in Ardmore on SR 7 was announced 2 years ago and was set to bid before the improve act was introduced!  Doss brothers inc. did not bid on the project!”

Doss did not deny, however, that the construction company he owns, Doss Brothers, Inc., is working on the project.

The Star can now confirm, based on documents obtained from the Tennessee Department of Transportation (TDOT) in a public records request, that Doss Brothers, Inc. is listed by the Rogers Group, the contractor who was awarded the $2.2 million project on March 31, 2017, as a subcontractor performing “earthwork” and “concrete flatwork” work on the project.

The name of the “earthworks” subcontractor on the TDOT form for that March 31, 2017 contract awarded to the Rogers Group is Doss Brothers, Inc.

Doss Brothers, Inc. is also named as the “concrete flatwork” subcontractor in that same contract.

According to data provided by TDOT on the subcontracted line items in the awarded contract, more than $424,000 is being paid by the Rogers Group to the subcontractor who has been awarded the “earthwork” portion of the job, as the Table below shows: 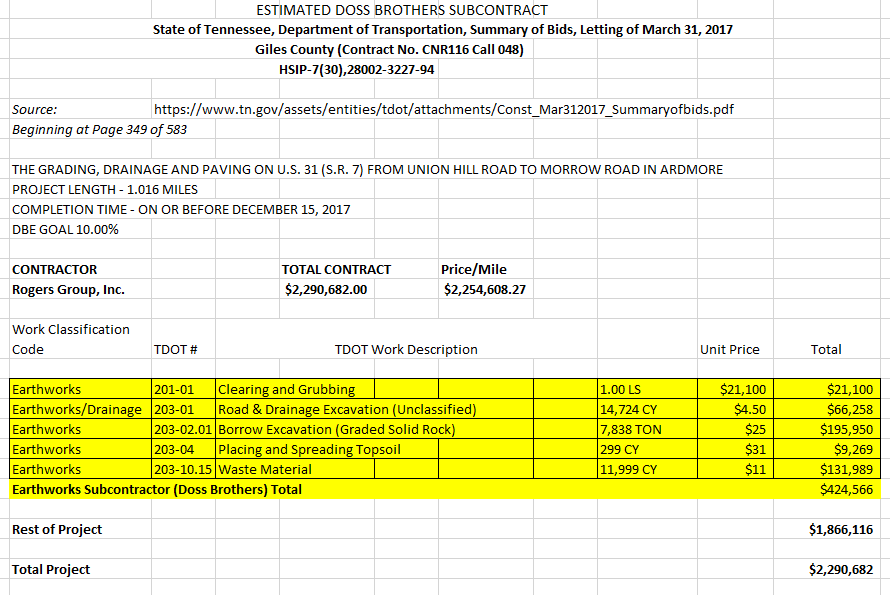 The Star asked Rep. Doss to confirm or deny that at least $400,000 of work on the $2.2 million SR-7 Ardmore road construction project awarded to the Rogers Group by TDOT on March 31, 2017 was subcontracted to Doss Brothers, Inc., but he did not respond to our request for comment.

The Star also asked the Rogers Group for comment but did not receive a response.

The Tennessee Department of Transportation (TDOT) publicly available records appear to contradict claims by Rep. Doss that his company, Doss Brothers, Inc., is “not a road builder,” but rather just “a small general contractor who happens to do dirt work and paving.”

They also appear to contradict his earlier statement when pressed on claims that he has a conflict of interest in pushing Gov. Haslam’s gas tax increase bill that “there is no benefit to my company because of this bill.”

According to page 22 of 86 of TDOT’s on-line list of “Prequalified Contractors As Of October 05, 2017,” Doss Brothers, Inc. is capable of performing 18 of 34 TDOT’s Work Classification Codes.

To become a TDOT “Prequalified Contractor,” a licensed contractor must submit a completed Prequalification Questionnaire. On the Questionnaire, the Contractor selects the work they are capable of doing from the 34 check boxes called “Work Classification” (on page 11 of 19), in accordance with the instruction to “Check all work classifications in which your company has prior experience and wishes to be given consideration for prequalification.”

It is through the submission of this form that Doss Brothers, Inc., as a contractor or subcontractor, would have informed TDOT of the company’s many capabilities to meet TDOT’s needs for road and bridge construction.

Doss’s statement to The Tennessee Star about the work that his company is doing on U.S. 31 / S.R. 7 in Ardmore that “Doss Brothers Inc. did not bid on the project,” corresponds with TDOT records that show Rogers Group, Inc. was awarded the contract, indicating that Doss Brothers, Inc. is a subcontractor on the project.

Contractors are obligated to report all subcontractors to TDOT, as specified in its “Instructions to Bidders,” where it states in the “Subcontractor Bidders List” section of the instructions on page 4 of 5:

The apparent low bidder for each project must provide a list of all subcontractors who provided a quote to perform work. The list shall be provided electronically on the TDOT form “Certification Regarding Subcontractor Bid Quotes” (Bidders List). The apparent low bidder shall submit this form before the close of business (4:30 PM, Central Time) five (5) calendar days after the date on which bids are required to be submitted.

In comparing Doss Brothers’ capabilities as listed by TDOT to the line items on the bid, Doss Brothers is able to do 60 of them, representing 78 percent of the work.

The only U.S. 31 / S.R. 7 project work line items Doss Brothers is not listed as being capable of performing include engineering, “scoring for rumble strip,” “cold planing bituminous pavement,” guardrails, signs, for which TDOT has no specific classification, and mowing.

It is also noteworthy that TDOT’s estimated cost of the project increased significantly – 60 percent – since being listed on TDOT’s Statewide Project Overview Tracker (SPOT) at the time the IMPROVE Act was launched in January until it went to bid and was awarded in March 2017, going from $1.5 million to $2.4 million.

Activities before, during and after the passage of the IMPROVE Act, have raised questions related to Rep. Barry Doss, including an October 19, 2016, Rogers Group PAC contribution of $1,500 to Barry Doss’s 2016 re-election campaign; Doss breaking House Rules to pass the IMPROVE Act through the House Transportation Committee; and, Doss Brothers, Inc. now apparently performing the majority of the work on a multi-million-dollar TDOT project.

Based on this guiding principle of ethical conduct, the Tennessee Republican Assembly made two calls for an ethics investigation by Speaker Beth Harwell, who appointed Barry Doss for his first time as a member and Chairman of the House Transportation Committee, both of which have gone unanswered.